Beautifully engraved scarce Certificate from Frederick's of Hollywood issued in 1976 - 1978. This historic document was printed by the Jeffries Banknote Company and has an ornate border around it with a vignette of the company's logo surrounded by clouds. This item has the printed signatures of the company's officers including its President and Founder, Frederick Mellinger. This highly desirable certificate is over 22 years old. 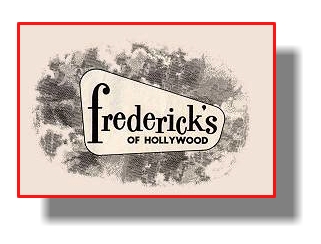 Certificate Vignette
In 1946, the legend of Frederick's of Hollywood was born! Founded by Frederick Mellinger, Frederick's of Hollywood was established to design sexy, beautiful lingerie that emulated European trends in the early 1940's. Mellinger noticed that great lingerie could make women feel beautiful from the inside out. More than fifty years later, the company has become the trendsetter in intimate apparel and carries a well-deserved reputation for sexy and playful lingerie that is flattering to women of all sizes. Frederick's success comes in part from creating lingerie that is high quality, comfortable, sexy and a terrific value. Frederick Mellinger Above all, the goal at Frederick's of Hollywood is to make every woman feel her most beautiful regardless of size, shape or age. Lingerie Innovator Frederick's innovative approach to lingerie has seen the introduction of many styles of lingerie that went from a Frederick's exclusive to worldwide lingerie staples, such as the push-up bra. "The Rising Star," the world's first push-up bra was launched in the early 1950's to great success. Since then, every lingerie manufacturer in the world has created its own versions of this most popular style. Today, Frederick's offers more than 15 styles of push-up to suit every woman. Other trend-setting styles included the advent of the front-hook bra, bras with shoulder pads, padded girdles, body-shapers and colorful fashion bustiers. For example, the Ultimate Corset with a unique design and form fitting style -- takes inches off while giving women a sexy and curvy look. Frederick's also introduced the thong panty to American women in 1981. Today, Frederick's offers more than 25 styles and sells tens of thousands weekly of the popular "Rio" style the fastest and largest selling thong around the world. Frederick's recently introduced two unique styles: Water Bra First sold in 1998, the Water Bra's unique push-up "padding" is filled with a mixture of rosewater and oil. When worn, the water and oil combination warms to the body and creates the most natural look and feel. The bra adds a full cup size and is completely puncture-proof. Since its introduction, the Water Bra has become Frederick's best-selling bra. Hollywood Kiss The Hollywood Kiss bra is a completely re-engineered push-up bra. With its "wishbone" construction and all around wiring, the bra creates a "kissing cleavage." The company, which has more than 200 women's intimate apparel retail stores in about 40 states, sells lingerie, bras, foundations, dresses, sportswear, swimwear, wigs, edible underwear, and hosiery. Frederick's pioneered the push-up bra and other intimate apparel designed from a man's point of view, but it is now trying to increase its appeal to women. The company operates a mail-order catalog business in the US and Canada and an online shopping site. Heavy debt forced Frederick's to file for Chapter 11 bankruptcy protection. Investment firm Wilshire Partners owns the firm.