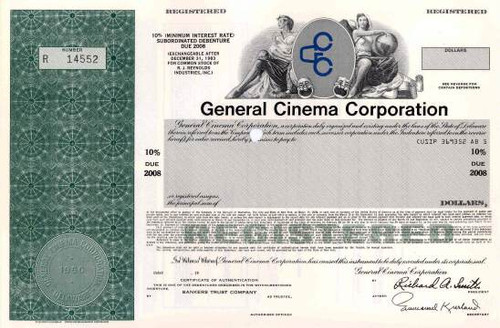 Beautifully engraved unissued certificate from the General Cinema Corporation. This historic document was printed by the Security-Columbian Banknote Company and has an ornate border around it with a vignette of the company logo with an allegorical woman on both sides. This item has the printed signatures of the company's President ( Richard A. Smith ) and Secretary.

Certificate Vignette
Richard Smith graduated from the Browne & Nichols School in Cambridge in 1942 and received his SB from Harvard College, Class of '46 ('44). Shortly after graduation, and service in the Navy, he went to work for General Cinema Corp., then a family-controlled drive-in theater chain. In the decades since, he led the company's development into a diversified enterprise now known as Harcourt General Inc., a Fortune 500 company with interests now concentrated in publishing and an array of educational products and services. He has been chairman of the board since 1961, and served as chief executive officer from 1961 to 1991, and from 1997 until this past November. In addition, he has served as chairman and CEO of The Neiman Marcus Group and GC Companies Inc.