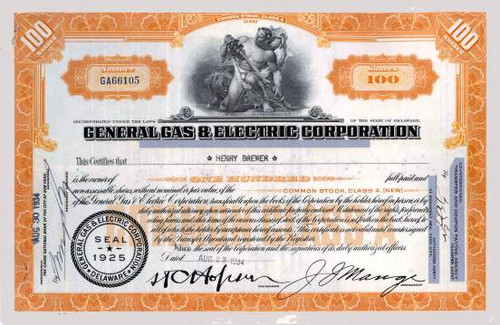 Beautifully engraved certificate from the General Gas & Electric Corporation issued in 1934. This historic document was printed by the American Banknote Company and has an ornate border around it with a vignette of an allegorical man. This item has the printed signatures of the Company's President and Treasurer and is over 68 years old. 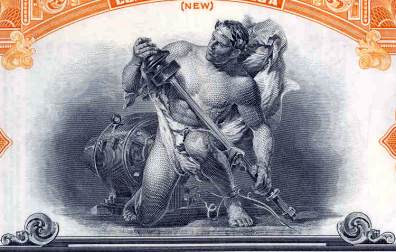 Certificate Vignette
By the turn of the century, mergers meant fewer but larger utility companies. Demand for electricity was growing, and SCANA's early ancestors continued to make their mark with first-time achievements. In 1894, Columbia Water Power Company's powerhouse on the Columbia Canal supplied the power for the world's first electrically powered textile mill. Mergers accelerated in the early '20s. In 1924, the Broad River Power Company organized as a subsidiary of General Gas & Electric Corporation. The next year it bought the electric and gas properties of Columbia Railway, Gas & Electric Company. The new company immediately set out on a construction program to add electric generating capacity. South Carolina Power Company formed in 1926 when several smaller utility companies consolidated in Charleston. Two years later, Commonwealth & Southern Corporation purchased controlling interest in South Carolina Power Company. It then merged with the Augusta-Aiken Railway & Electric Company, Georgia-Carolina Power Company and the Edisto Public Service Corporation, bringing 13 new counties into the Charleston company's service territory. While the gas and electric industries continued to grow, the streetcars reached their zenith during World War I, carrying thousands of soldiers on their way to and away from the war theater. But the streetcars were abandoned as obsolete in Columbia in 1936 and in Charleston in 1938. The rails lay idle until World War II, when they were taken up and used as scrap metal in the nation's war effort. During the next two decades, the growth of both companies helped fuel expansion of the state's economy. In 1927, the Lexington Water Power Company received a license to build a dam on the Saluda River northwest of Columbia. Saluda Dam, which would create the 50,000-acre Lake Murray, was the largest man-made barrier built for power production in the world when completed in 1930. In addition, the project provided desperately needed jobs in the lean years leading up to and beyond the stock market crash of 1929 and the beginning of the Great Depression. In 1937, the Broad River Power Company changed its name to South Carolina Electric & Gas Company, SCANA's principal subsidiary still today. Five years later, Lexington Water Power Company merged with SCE&G.