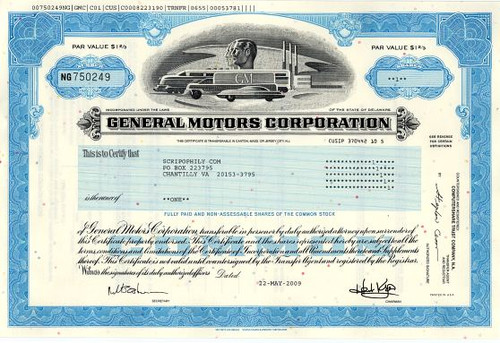 Beautifully engraved certificate from the General Motors Corporation (pre Bankruptcy) issued on May 22, 2009. General Motors filed for a government-assisted Chapter 11 bankruptcy protection on June 1, 2009. This historic document was printed by the American Banknote Company and has an ornate border around it with a vignette of men next to futuristic looking vehicles (at the time). This item has the printed signatures of the Company's Chairman, Kent Kresa and Secretary.

Certificate Vignette
General Motors (GM) was founded on September 27, 1908, in Flint, Michigan, as a holding company for Buick, then controlled by William C. Durant. It acquired Oldsmobile later that year. In 1909, Durant brought in Cadillac, Elmore, Oakland (later known as Pontiac) and several others. Also in 1909, General Motors acquired the Reliance Motor Truck Company of Owosso, Michigan, and the Rapid Motor Vehicle Company of Pontiac, Michigan, the predecessors of GMC Truck. Durant lost control of GM in 1910 to a bankers' trust, because of the large amount of debt taken on in its acquisitions coupled with a collapse in new vehicle sales. A few years later, Durant started the Chevrolet Motor car company and through this he secretly purchased a controlling interest in GM. Durant took back control of the company after one of the most dramatic proxy wars in American business history. Shortly after, he again lost control, this time for good, after the new vehicle market collapsed. Alfred Sloan was picked to take charge of the corporation and led it to its post war global dominance. This unprecedented growth of GM would last into the early 1980s when it employed 349,000 workers and 150 assembly plants. In late 2008 GM, along with Chrysler, received loans from the American, Canadian, and Ontario governments to avoid bankruptcy resulting from the late-2000s recession, record oil prices, mismanagement, and fierce competition (see also automotive industry crisis of 20082009). On February 20, 2009, GM's Saab division filed for reorganization in a Swedish court after being denied loans from the Swedish government. On April 27, 2009, amid ongoing financial problems and restructuring efforts, GM announced that it would phase out the Pontiac brand by the end of 2010 and focus on four brands in North America: Chevrolet, Cadillac, Buick, and GMC. It also announced that the resolution (sale) of its Hummer, Saab, and Saturn brands would take place by the end of 2009. GM had previously eliminated the Oldsmobile brand earlier in the decade for similar reasons. As of April 24, 2009 (2009 -04-24), GM has received US$15.4 billion in loans from the US Treasury Department under the Troubled Assets Relief Program (TARP). GMAC, a financing company held 49% by GM, has received US$5 billion in loans under the same program, while GM has received an additional US$1 billion loan to buy more equity in GMAC. General Motors Canada, 100% owned by GM, has received a combined loan commitment of C$3 billion from the Canadian and Ontario governments. General Motors filed for a government-assisted Chapter 11 bankruptcy protection on June 1, 2009, with a plan to re-emerge as a smaller and less debt-burdened organization in several months. The chapter 11 petition was filed in the federal court in Manhattan, New York. The filing reported US$82.29 billion in assets and US$172.81 billion in debt. As ranked by total assets, the bankruptcy is the fourth-largest in U.S. history, following Lehman Brothers Holdings Inc., Washington Mutual and WorldCom Inc. Kent Kresa was named the Chairman of GM on March 30, 2009 after Rick Wagoner, the Chairman and CEO of GM was ordered to resign by U.S. President Barack Obama History from Wikipedia and OldCompany.com (old stock certificate research service).