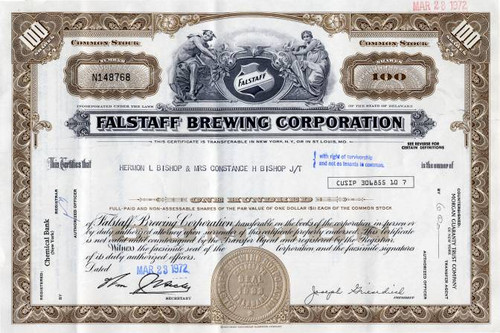 Beautiful certificate from the Falstaff Brewing Corporation issued no later than 1973. This historic document was printed by the Security-Columbian Banknote Company and has an ornate border around it with an allegorical vignette with Falstaff logo. This item has the printed signatures of the Company's President, and Secretary, and is over 39 years old. This is the first time we have had an uncancelled certificate for sale from this company.

Certificate Vignette
The Falstaff Brewing Corporation was a major American brewery located in St. Louis, Missouri. With roots in the 1838 Lemp Brewery of St. Louis, the company was renamed after the Shakespearean character of Sir John Falstaff in 1903. Production peaked in 1965 with 7,010,218 barrels brewed, and then dropped 70 percent in the next ten years. While its smaller labels linger on today, its main label Falstaff Beer went out of production in 2005. Falstaff Brewing's earliest form was as the Lemp Brewery belonging to German immigrant John Adam Lemp in St. Louis in the 1838. Over the next 80 years the Lemp family was devastated by personal tragedies as it built its beer empire over the caves of St. Louis. It adopted its famous "Blue Ribbon" moniker quickly, as a 1898 trial proved when it took the Storz Brewing Company of Omaha to court for tying blue ribbons on its bottles, and won. The Lemp Brewery company closed in 1921, and sold its Falstaff brand to the then-named Griesedieck Beverage Company. Griesedieck Beverage was renamed the Falstaff Corporation and survived Prohibition by selling near beer, soft drinks, and cured hams under the Falstaff name. Falstaff Brewing was a publicly traded company on the New York Stock Exchange, which was rare for a brewing industry in which families closely guarded their ownership. Doorway of the former Falstaff Brewery building in New Orleans with the "Falstaff" name and logo, as well as post-Hurricane Katrina floodlines. When Prohibition was repealed in 1933 the first two cases of beer were airlifted from nearby Curtiss Stienberg Airport to the governors of Illinois and Missouri. After which, the company expanded greatly. Its first acquisition was the 1936 purchase of the Krug Brewery in Omaha, which made Falstaff the first brewery to operate plants in two different states. Other facilities bought in this period included the National Brewery of New Orleans in 1937, the Berghoff Brewing Company of Fort Wayne, Indiana, in 1954, the Galveston-Houston Brewing Company of Galveston, Texas, in 1956, and the Mitchell Brewing Company of El Paso in 1956. On New Years Day in 1953 renowned country musician Hank Williams was drinking Falstaff on the night of his death. Falstaff was the third largest brewer in America by the 1960s, with several plants across the country. The 1965 acquisition of another company, the Narragansett Brewing Company of Rhode Island, proved disastrous, with the state government of Rhode Island pursuing an antitrust case against them. The Supreme Court found in Falstaff's favor in 1973, but the company never recovered. Fortunes declined throughout the 1970s as consolidation swept the beer industry, and the company was bought in April 1975 by the S&P Company, owned by Paul Kalmanovitz. Somewhere in the interim, Chicago White Sox announcer Harry Caray endorsed the tasty brew in live TV commercials many time with a glass of beer in his hand and sipping it. Kalmanovitz also owns General Brewing, Pabst, Pearl, Olympia, and Stroh's. That year the company ranked 11th in sales nationally,and the original St. Louis plant was closed. Subsequent closures included New Orleans in 1979, Cranston and Galveston in 1981, and Omaha in 1987. After the 1990 closing of the last Falstaff brewery in Fort Wayne, the brand name became a licensed property of Pabst, which continued to produce Falstaff Beer through other breweries. Having sold only 1468 barrels of the brand during 2004, Pabst discontinued production of the Falstaff label in May 2005. Falstaff Beer is mentioned in the Ray Wiley Hubbard song, "Up Against the Wall Redneck Mother," in Sheryl Crow's song "A Change Would Do You Good," and a commercial song is done by Cream on their "Those Were The Days" four-disc set. In the 1991 film, "My Own Private Idaho," the visibility of a Falstaff beer bottle in Keanu Reeves's hand (who is presumably derived from the character Hal) in William Richert's (presumably emblematic of Falstaff) entrance to the scene, alludes to the movie's inspiration, in part, gleaned from Shakespeare's King Henry IV. The brand is also mentioned in novels by Robert Crais, a writer from Louisiana where Falstaff had a satellite brewery, as being the main character's (Elvis Cole) drink of choice throughout the length of the series. (Although in later books, such as "The Sentry," when Falstaff was presumably harder to find, Elvis switches his taste to the Mexican beer, Negra Modelo. Ironically however the producer of Negra Modelo, Grupo Modelo is currently half owned by St. Louis based brewer Anheuser-Busch a one time competitor to Falstaff, their brewery buildings located only several miles apart in St. Louis.) History from Wikipedia and OldCompany.com (old stock certificate research service)