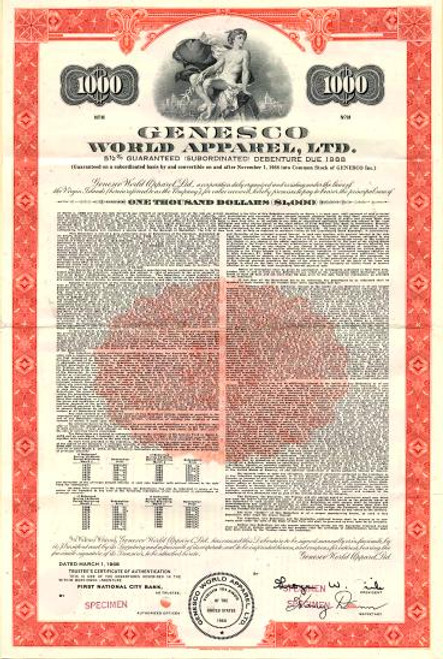 Beautifully engraved specimen certificate from Genesco World Apparel, Ltd. dated 1968. This historic document was printed by American Bank Note Company and has an ornate border around it with a vignette of Mercury. This item has the signatures of the Company's President and Secretary and is over 48 years old.

Certificate Vignette
Genesco Inc. (NYSE: GCO), based in Nashville, Tennessee, United States, is a publicly-owned retailer of branded footwear, licensed and branded headwear and licensed sports apparel and accessories and is a wholesaler of branded and licensed footwear. Through its various subsidiaries, Genesco operates 2,276 retail stores throughout the United States, Puerto Rico and Canada and wholesales branded and licensed footwear to more than 900 retail accounts.[2] Founded as the Jarman Shoe Company in 1924 as a footwear manufacturer, the company changed its name to the General Shoe Company in the 1930s and became a public company in 1939. The company took its current name, Genesco, in 1959. Genesco exited footwear manufacturing in 2002 and now contracts with independent, third parties located outside the United States to manufacture its branded and licensed footwear. James Franklin Jarman and William Hatch Wemyss, both former salesmen for Carter Shoe Co. in Nashville, founded Jarman Shoe Company in 1924 as a footwear manufacturer.[6] The company grew rapidly and took the name General Shoe Company in the 1930s. General Shoe Company's initial public stock offering took place in 1939. By the 1950s, General Shoe had factories in many southern towns, especially in Genesco's home state of Tennessee. The company assumed its current name, Genesco, in 1959, two years after it was chosen as one of the stocks in the first S&P 500 Index. Under the leadership of W. Maxey Jarman, the ambitious son of co-founder J.F. Jarman, the company slowly began the process of diversifying away from strictly footwear manufacturing, especially as more of this was conducted overseas. It entered into fields such as sports, at one time manufacturing and selling football (soccer) balls and at one point owned New York department store Bonwit Teller. The company suffered from over-diversification at one point, and the ongoing manufacturing operations in the Southern United States continued to depress results for a long period of time. The company was probably saved by its decision to reposition itself as a retailer. Genesco exited the business of shoe manufacturing when it closed Johnston & Murphy's Nashville, TN factory in 2002. Genesco now contracts with independent, third parties located outside the United States to manufacture its branded and licensed footwear. In June 2007, Genesco accepted a $1.5 billion buyout offer from Finish Line, Inc. Since the merger agreement was signed, both Finish Line, Inc. and the deal's financier UBS AG have attempted to back out[9] of the merger citing a material adverse change based, in part, on Genesco's weaker than expected results from the second quarter of 2007. Litigation ensued and the matter went to trial on December 10, 2007. The following is a list of retailers and brands owned by and licenses held by Genesco: Johnston & Murphy - Retailer of better men's and women's footwear, apparel, luggage and leather goods sold in Genesco owned Johnston & Murphy retail stores and wholesaler of footwear to department and specialty stores. Dockers Footwear - Casual footwear marketed under license from Levi Strauss & Co. and sold at wholesale to department and specialty stores Hat World, Lids, Lids Kids, Cap Connection, Hat Zone, Hat Shack, and Head Quarters - Retailers of licensed and branded headwear and athletic apparel. Journeys - Retailer of footwear for teens and young adults. Journeys Kidz - Retailer of footwear for infants and children. Many of the brands and styles found in the normal Journeys stores can be found in smaller sizes in Journeys Kidz stores. Underground Station - Retailer of footwear brands such as Timberland, Eckō, and Puma for young men and women 20 to 35 years of age in the urban market. ShÃ¯ by Journeys - Retailer of footwear for young women 20 to 35 years of age. History from Wikipedia and OldCompany.com (old stock certificate research service). About Specimens Specimen Certificates are actual certificates that have never been issued. They were usually kept by the printers in their permanent archives as their only example of a particular certificate. Sometimes you will see a hand stamp on the certificate that says "Do not remove from file". Specimens were also used to show prospective clients different types of certificate designs that were available. Specimen certificates are usually much scarcer than issued certificates. In fact, many times they are the only way to get a certificate for a particular company because the issued certificates were redeemed and destroyed. In a few instances, Specimen certificates we made for a company but were never used because a different design was chosen by the company. These certificates are normally stamped "Specimen" or they have small holes spelling the word specimen. Most of the time they don't have a serial number, or they have a serial number of 00000. This is an exciting sector of the hobby that grown in popularity over the past several years.