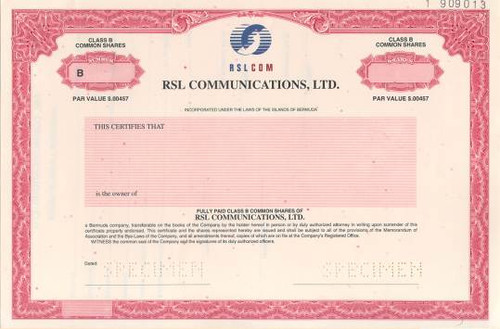 Beautifully engraved specimen certificate from the RSL Communications, Ltd. . This historic document has an ornate border around it with a vignette of the company's logo. RSL Communications -- controlled by Ronald Lauder, son of Estee Lauder -- provided telecom services to small and medium-sized businesses in more than 30 countries; half of its sales come from Europe. RSL also provided broadband Internet access and other data services in several countries, including Australia, Canada, Germany, and the UK. The carrier has a network with some 71 switches worldwide, and it owns and leases its fiber capacity. RSL has sold its stake in deltathree.com, an Internet protocol (IP) telephony provider. Chairman Lauder owns 28% of RSL and controls 57% of the voting stock. The company had begun insolvency proceedings.