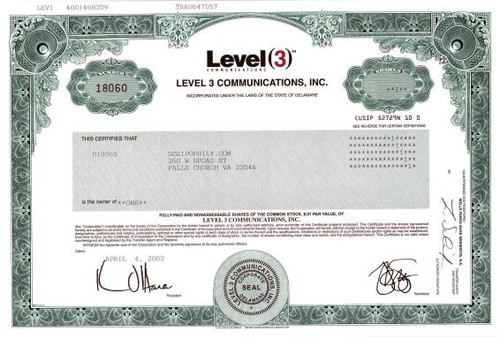 Beautifully engraved Certificate from the Level 3 Communications . This historic document was printed by the Security Columbian Banknote Company and has an ornate border around it with a vignette of the company's name. This This item has the printed signatures of the company's officers.

Certificate Vignette
Level 3 Communications operates an Internet protocol (IP)-based long-haul network that includes intercity fiber-optic rings in the US and Europe and undersea capacity across the Atlantic. Packing its network with fiber and spare conduits for future upgrades, Level 3 serves such data-intensive customers as ISPs and telecom carriers. But the demand for fiber-optic network capacity has failed to reach expected levels, and Level 3 in 2001 announced plans to cut nearly 25% of its workforce. The company also sold its Asian operations, including its ownership in a Japan-US submarine cable and backhaul system. Level 3 has built a global communications network unlike any other ever built. It is the most advanced communications platform in the world. It is the first network to be completely optimized for advanced IP (Internet Protocol) technology and the first to be fully and continuously upgradeable - enabling Level 3 to continue to deploy new, superior technology as it is developed. Level 3 built this unique network because the company believes there is a fundamental shift occurring in the communications industry - one that will change the way businesses communicate. That change is a move from the networks designed primarily for voice to newer IP networks designed for voice, data and video. This new IP technology makes it possible to move information at a much lower cost, making it a more efficient use of network capacity. The objective is to bring to the communications industry the kind of price performance improvements previously seen in the computing industry, allowing the company to continuously lower the cost of moving information. The network was designed to evolve as technology evolves, taking advantage of the fact that a new generation of fiber becomes available every 18-24 months. Additionally, optoelectronics - the equipment that controls the flow of information through a network much as valves control the flow of water through a pipe - are improving even faster. Doubling in price performance every 9-10 months, optoelectronics are the fastest improving technology in industrial history. Because it can harness the cost and performance benefits of improving technology, Level 3 is able to introduce innovative pricing to its customers. Level 3 has essentially completed construction of its global IP network. In North America, the company has a 16,000 mile intercity network, 27 metropolitan networks and offers Internet infrastructure services in 56 markets. In Europe, Level 3 has completed approximately 3,600 miles of its planned 4,750 mile pan-European network, nine metropolitan networks and offers services in nine markets. The company also offers services in two markets in Asia and has transatlantic, transpacific and Asian undersea cable capacity completed or under development.