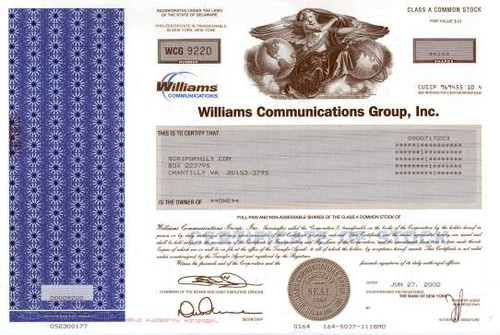 Beautifully engraved uncancelled certificate from the Williams Communications Group, Inc. issued in 2002. This historic document was printed by the American Banknote Company and has an ornate border around it with a vignette of the company logo and an allegorical woman between two globes. This item has the printed signatures of the Company's Chairman of the Board and Chief Executive Officer and Secretary.

Certificate Vignette
WilTel Communications (formerly known as Williams Communications, which was formerly part of The Williams Companies, Inc) is a telco and Tier 2 Internet Service Provider with its own MPLS-enabled OC-192 optical wave division multiplexing backbone network. Its other products and services include IP VPNs, Private Line services (protected and unprotected), colocation, Ethernet-based wide area networking, ATM and Frame Relay network services. The company was acquired by Level 3 Communications in December 2005 for roughly $800 million in cash and stock. WilTel also provides broadcast video distribution services including High Definition television distribution. WilTel Communications also offers a wide range of professional services. Leucadia, the previous owner of WilTel Communications, sold all of its shares of Level 3 (acquired as part of the sale of WilTel Communications) on March 22, 2006 at $3.44 per share, for a pre-tax gain of approximately $37.4M. On March 29, 2006, Level 3 shares reached $5.60 per share, leaving roughly $100M on the table for Leucadia had they waited 7 days to sell. History from Wikipedia and OldCompany.com (old stock certificate research service).