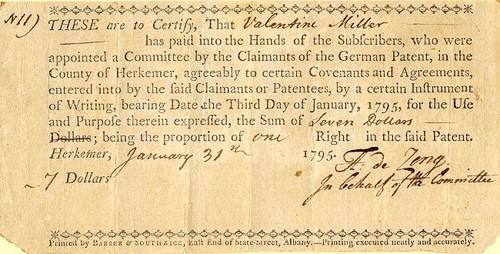 Historic receipt for one right in the German Patent. Reads " who were appointed a Committee by the Claimants of the German Patent, ... relating to the German Land Patent for County of Herkemer, New York issued in 1795. This historic document was printed by Barber & Southaice Company of Albany, New York. This item is handsigned and is over 213 years old. The Newburgh City Archives refers to the The German Patent in the early records of Newburgh, New York Unlike most settlements in the Hudson Valley, Newburgh was settled by English, Scottish, and Irish. Now the largest urban center in Orange County, Newburgh began early in the eighteenth century, as a German settlement under English charter - and as part of Ulster County. After the American Revolution it became a crucial point in the merchandising network that funnelled food and other products to Manhattan by water.