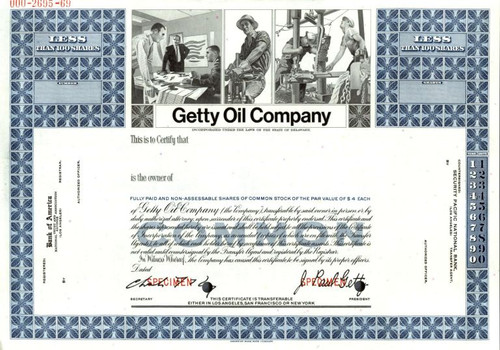 Beautiful speciman stock certificate from the Getty Oil Company printrd in 1969. This historic document was printed by American Bank Note Company and has an ornate border around it with a vignette of oil company employees at work. This item has the signatures of the Company's President, J. Paul Getty and Secretary and is over 38 years old. 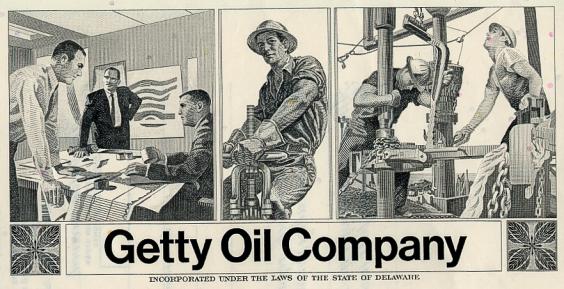 Certificate Vignette
Jean Paul Getty (December 15, 1892 June 6, 1976) was an American industrialist and founder of the Getty Oil Company. Biography Born in Minneapolis, Minnesota, into a family already in the petroleum business, he was one of the first people in the world with a fortune of over $1 billion U.S. dollars. He was an avid collector of art and antiquities, and his collection forms the basis of the J. Paul Getty Museum in Los Angeles, California. He enrolled at the University of Southern California, then at Berkeley before graduating in 1914 from Magdalen College, Oxford with degrees in economics and political science. He worked during the summers on his father's oil fields in Oklahoma. Running his own oil company in Tulsa, he made his first million by 1916. However, in 1917, he announced that he was retiring to become a Los Angeles-based playboy. Although he eventually returned to business, Getty had lost his father's respect. Just before George Franklin Getty died in 1930, he believed that Jean Paul would destroy the family company, and told him so. In fact Getty increased the family wealth, teaching himself Arabic to assist in his expansion into the Middle East. He moved to England in the 1950s, where he lived and worked at his 16th-century Tudor estate, Sutton Place near Guildford, until his death. Getty married five times to: Jeanette Dumont (192325); one son George Franklin Getty (died 1973) Allene Ashby (192628) Adolphine Helmle (192832); one son Jean Ronald Getty Ann Rork (193235); two sons John Paul Getty (1932-2003) and Gordon Getty (born 1934) Louise Dudley Lynch (1939 -1958); one son Timothy Getty (died aged 12) He was later quoted as saying, "A lasting relationship with a woman is only possible if you are a business failure." Views on His Own Success Getty wrote a very successful book entitled How to be Rich. Note that it was not "How to get Rich." His oil business was handed to him by his father, who started the business. Getty fully acknowledges this in his autobiography, I enjoyed the advantage of being born into an already-wealthy family, and when I began my business career I was subsidized by my father. While I did make money-and quite a bit of it-on my own, I doubt if there would be a 'Getty Empire' today if I had not taken over my father's thriving oil business after his death. (Getty, 1976, pg.336). Coin-box Telephone It is true that Getty had a pay phone installed at Sutton Place manor. However, the reason behind it is fairly simple. In Getty's own autobiography (Getty, 1976, pg.319): "Now, for months after Sutton Place was purchased, great numbers of people came in and out of the house. Some were visiting businessmen. Others were artisans or workmen engaged in renovation and refurbishing. Still others were tradesmen making deliveries of merchandise. Suddenly, the Sutton Place telephone bills began to soar. The reason was obvious. Each of the regular telephones in the house has direct access to outside lines and thus to long-distance and even overseas operators. All sorts of people were making the best of a rare opportunity. They were picking up Sutton Place phones and placing calls to girlfriends in Geneva or Georgia and to aunts, uncles and third cousins twice-removed in Caracas and Cape Town. The costs of their friendly chats were, of course, charged to the Sutton Place bill." Hence, the only solution was to place dial-locks on all the regular telephones, limiting their use to authorised staff, and the coin-box telephone was installed for others. However, when speaking in a televised interview with Alan Whicker, Getty simply explained it by saying that he thought guests would want to use a payphone. Getty's Initial Refusal to Pay Ransom At age 16, on 10 July 1973 in Rome, John Paul Getty III was kidnapped and a ransom of $17 million was demanded over the phone for his safe return. As Paul III was so rebellious, when the first ransom message arrived, the family suspected a ploy by the teenager to extract money from his miserly grandfather. A second demand was delayed by an Italian postal strike . John Paul Getty II asked his father for the money, but was refused . Finally, in November 1973 an envelope containing a lock of hair and a human ear was delivered to a daily newspaper, with a threat of further mutilation unless $3.2 million was paid over: "This is Paul's ear. If we don't get some money within 10 days, then the other ear will arrive. In other words, he will arrive in little bits." At this point J. Paul Getty agreed to pay a ransom, subject to him negotiating the fee, and Paul II repaying the sum at 4% interest. Still reluctant to part with the ransom, Getty senior negotiated a deal and got his grandson back for about $2 million. Paul III was found alive in southern Italy shortly after the ransom was paid. His kidnappers were never caught. Paul III was permanently affected by the trauma, and himself became a drug addict. In 1981, Paul III was rendered speechless, blind and paralysed for the rest of his life by a cocktail of drugs and alcohol. J Paul Getty defends his initial refusal to pay the ransom on two points. Firstly he argues that he had fourteen other grandchildren, and to submit to the kidnappers' demands would immediately place his other fourteen grandchildren at the risk of copy-cat kidnappers. Secondly: "The second reason for my refusal was much broader-based. I contend that acceding to the demands of criminals and terrorists merely guarantees the continuing increase and spread of lawlessness, violence and such outrages as terror-bombings, 'skyjackings' and the slaughter of hostages that plague our present-day world" (Getty, 1976, pg.139). History from Wikipedia and OldCompanyResearch.com.