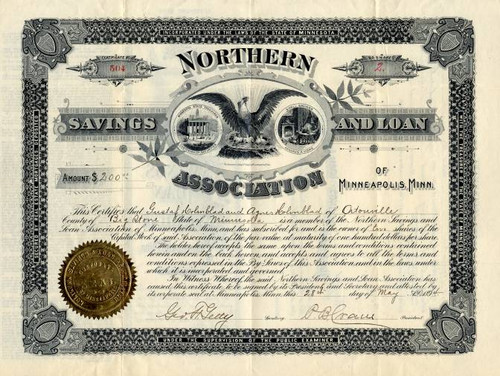 Beautiful certificate from the Northern Savings and Loan Association issued in 1894. This historic document has an ornate border around it with a vignette of an eagle. This item has the original signatures of the Company's President, and Secretary, George F. Getty and is over 118 years old. 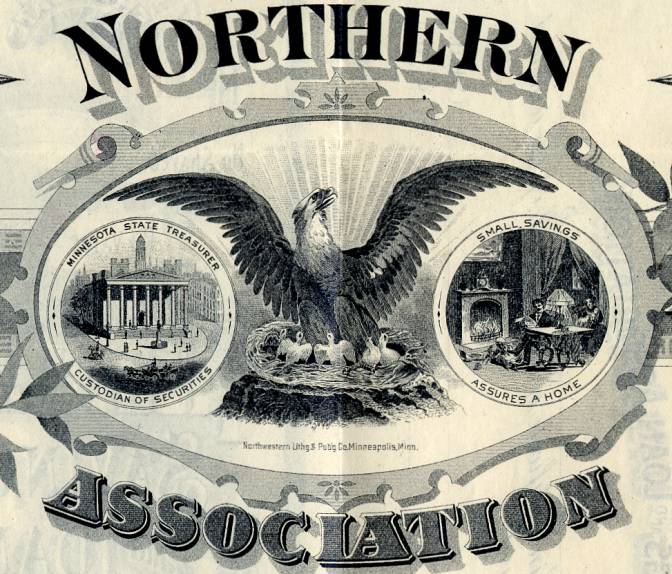 Certificate Vignette
George Franklin Getty (17 October 1855, Maryland 31 May 1930) was an American lawyer, father of industrialist J. Paul Getty and patriarch of the Getty family. In 1884, George F. Getty moved to Minneapolis, Minnesota where he specialised in insurance and corporate law and made a good living in what was the "flour capital" of America. In 1890 his first child, a daughter, died in a typhoid epidemic that hit the city. In 1892, the Gettys had another child, a son, Jean Paul Getty (later known as J. Paul Getty). In 1904 the Gettys moved, from Minnesota to Oklahoma, where George began a career as an independent oilman. Within two years, he had amassed a fortune from his Minnehoma Oil Company and moved his family to Los Angeles, California. In 1913, George lent his son Jean Paul (then aged 21) money to invest in oil wells. By 1915 Jean Paul had made his first million and the following year George and Jean Paul incorporated the Getty Oil Company, to become Getty Oil later. George never did approve of Jean Paul's lifestyle. Perhaps this is why he did not leave the company in the sole control of his son. George F. Getty died in 1930. He left his estate, valued at between $10 million and $15 million U.S., to his wife Sarah in the form of the controlling interest in the family firm; "George F. Getty, Inc.", although Jean Paul--J.P. Getty became President of the firm.