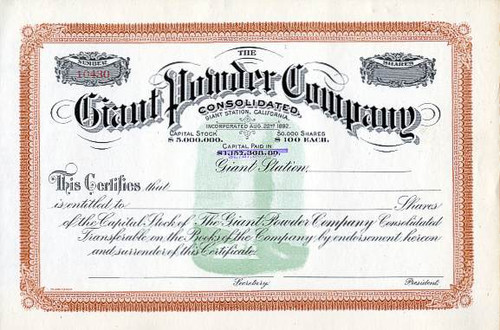 Beautifully engraved certificate from the Giant Powder Company is unissued. This historic document was printed in 1915 by Union Litho. and has an ornate border around it with the company's name in fancy print. There is also an underprint of an explosion. The certificate is over and is over 89 years old.

Certificate Vignette
The Giant Powder Company was the first company in America to produce dynamite. The Giant Powder Company moved to Point Pinole around San Francisco in 1892 and set up the company town of Giant, along with its plant to produce explosives used throughout the world in major earth moving efforts. Since 1960, when the company left, the company town became part of a residential development, and mother nature has taken over the rest. All that remains are some in-cognito, blast-protecting concrete bunkers.