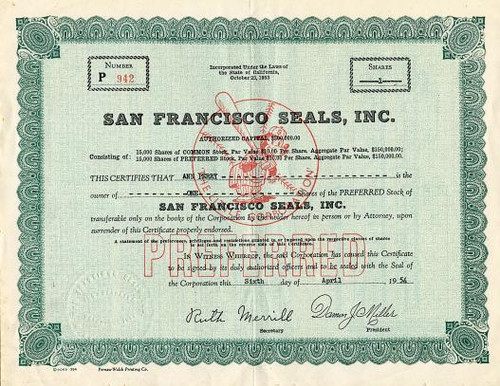 Beautiful uncancelled certificate from the San Francisco Seals, Inc. issued in 1954. This historic document was printed by Pernau-Walsh Printing Company and has an ornate border around it with a vignette of the Seals' logo. This item has the printed signatures of the Company's President, Damon J. Miller and Secretary, Ruth Merrill and is over 52 years old.

Certificate Vignette
The San Francisco Seals were a minor league baseball team which played in the Pacific Coast League from 1903 until 1957. Along with the Los Angeles Angels, Portland Beavers, Oakland Oaks, Sacramento Solons, and Seattle Indians, the Seals were charter members of the Pacific Coast League which was founded in 1903. The team played its home games at Recreation Park at Harrison and 8th Streets until it was destroyed in the 1906 earthquake. The Seals finished out the 1906 season playing home games at Freeman's Park in Oakland. A new Recreation Park was constructed at 14th and Valencia Streets for the 1907 season. The Seals won their first PCL pennant in 1909, finishing 13½ games over the runner-up Beavers. They won flags also in 1915, 1917, 1922, 1923, and 1925. During the 1914 season, the Sacramento Solons were moved to San Francisco, where they finished out the season playing as the San Francisco Missions, supposedly representing the city's Mission District. The idea of a second team in San Francisco remained alive and, after the 1925 season, the Vernon Tigers were purchased by a group headed by San Francisco businessman Herbert Fleishaker and moved to San Francisco and renamed the Mission Reds or simply the "Missions," again purportedly representing the "Mission" as this team played its games 5 blocks away from Mission San Francisco de Asis. From 1926 through 1930, they played their home games at Recreation Park, playing at home while the Seals were on the road. In 1931, the Seals moved to their own park, Seals Stadium, an 18,600-seat facility located at 16th and Bryant Streets. Seals Stadium was unusual in that it boasted not two but three clubhouses: one for the visitors, one for the Seals, and one for the Missions, who moved there with the Seals and were the Seals' tenants from 1931 through 1937, after which the team moved back to Los Angeles to become the Hollywood Stars in 1938. The Seals celebrated their inaugural year in Seals Stadium by winning the PCL pennant in 1931. The following year, Seals outfielder Vince DiMaggio arranged a tryout for his younger brother Joe who, needless to say, made the team. In 1932, Joe DiMaggio hit safely in 61 straight games, a harbinger of his 56-game hitting streak for the New York Yankees in 1941. The team won the pennant again in 1935. In 1945, a controlling interest in the team was purchased by businessman Paul Fagan, with the stated intention of bringing major league baseball to the West Coast by having the Pacific Coast League becoming the nation's third major league. He spent thousands of dollars upgrading Seals Stadium to perceived major league standards. He hired former major league player Lefty O 'Doul, a native San Franciscan and fan favorite, as manager. Though the Seals won the pennant in 1946, subsequent teams under Fagan's watch did not fare so well, typically finishing in the second division. Rival clubs did not buy into Fagan's major league ambitions. Rather, they established working agreements with major league teams, and fared better than did the independent Seals. Fagan gave up and sold his interest in the Seals, who became an affiliate of the Boston Red Sox. After their Bay Area rival, the Oakland Oaks, moved to Vancouver after the 1955 season, the Seals won their last PCL pennant in 1957, which proved to be their final year as well. During the 1957 season, the New York Giants announced their move to San Francisco for the 1958 season, and the Seals were forced to relocate as a result. The Seals moved to Phoenix, Arizona for the 1958 season. Moreover, the team became a minor league affiliate of the new San Francisco Giants, and were renamed the Phoenix Giants. The Giants played their 1958 and 1959 home games in Seals Stadium, moving to Candlestick Park in 1960. Seals Stadium was subsequently torn down to make way for a Safeway grocery store. The legacy of the seals lives on in the Giants' mascot Lou Seal, as well as in a statue of the Seals' cartoon mascot (c. 1947) at AT&T Park. History from Wikipedia and OldCompany.com.