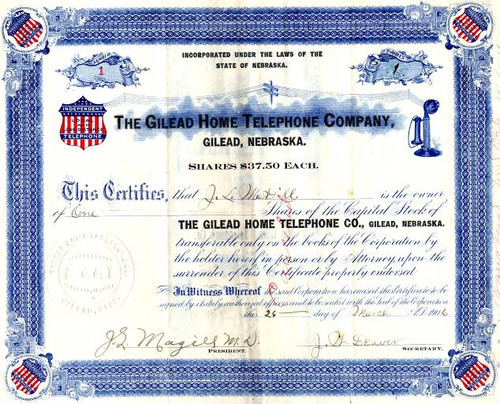 Beautiful certificate #1 from the Gilead Home Telephone Company printed in 1906. This historic document was printed by the Edward Hines Company and has an ornate border around it with a vignette of a telephone pole and with connecting cables, and an independent local and long distance shield. This item has the signatures of the Company's President, J. W. Deaver and Secretary, J. L. Magill, M.D. and is over 105 years old.

Certificate Vignette
Gilead -- Thayer County Gilead's first picture. Hotel de Stark is the second building on the right. The buggy is in front of the livery stable and across the street is the Pioneers Inn building built by the Reno Brothers from Alexandria in 1887. The water on main street was free. The official description of our town reads: "...This town is named for Gilead Precinct in which it is located. The name derives from Mount Gilead, Palestine." It is thought by many that the town was named "Gilead" because it is approximately the same distance from another town named Hebron that is also located in the Holy Land. Gilead, between the Oregon Trail and the Rose Creek settlement, was a prosperous farming region for many years before a town was established. When the Rock Island built its railroad line in the 1880s, there was a need for a station at this location. William Erwin moved his family closer to the right-of-way so his wife could cook for the workers. They were the first family to live in Gilead. The north part of town was owned by the Schainost family and the south part by the Naiman's. Erwin paid $100 for the first lot, where he built a store, just south of the present town hall. A second building was built by a Mr. Pratt. Mr. Gist did not wait until a building could be constructed but moved one in from Alexandria to serve as a restaurant. In 1889 the railroad station and a lumberyard added to the dignity of the fledgling town. All was not harmonious, however. The railroad put the crossing one block east of Main Street. The townspeople, however, wanted it on Main. When the railroad refused to move it, the people would quietly cover the rails with dirt at night. The next morning, the section crew had to clean the dirt out so the trains would not derail. The covering and uncovering continued until the railroad finally gave in and moved the crossing to Main Street. A bank opened in 1904, soon after Gilead was incorporated. It closed in February 1929. During that time, it was robbed twice. The second time there was very little loss because the thieves were unable to get the vault open. Another business was the Gilead Home Telephone Company. In 1906 it boasted "free service to 400 phones, with three companies combined -- Reynolds, Hubbell, and Gilead." By 1908 the company increased to 500 telephones after the town of Williams was added. A Lutheran Church was built in 1893, and Presbyterians organized in 1900. A Catholic Church building, built in 1910, remains, but the last mass was on May 27, 1990. A school was built in 1884. A second building in 1905 included classes for K-10, with an 11th grade mentioned at one time. The peak enrollment was 94 in 1937. In 1955 seven rural districts combined to form District 89, and a $63,000 building was constructed. When the building opened in 1957, there were 48 students enrolled. The highest number was 63 students in 1967. The 10 students enrolled 1991-92 will be the last. The Gilead school will close in May. Our grade 7-8 students attend classes in Hebron this year. The water system was put into town by the Little Blue Natural Resources District in 1976. The sewer system followed in 1980. The Fairbury Light and Water provides the town's electrical power. Gilead had three disastrous fires: -- 1907, a fire started in the millinery shop, then burned the bank, a restaurant, and a meat market before it could be stopped. -- 1923, the city hall and two other buildings were lost. -- 1936, fire destroyed the east side of Main Street with the exception of the rock building which is now the Pioneer Inn. This building was erected in 1887 by the Reno Brothers. A 50-foot brick addition was added in 1908. Gilead still meets most of the needs for the inhabitants in the town and the surrounding area. In 1913 the population was 181. At its peak, it is said that the population was over 200 and the town had 26 businesses. The Rock Island discontinued the service of a depot agent in January 1943, the line was abandoned March 1, 1973, and the tracks were taken up shortly thereafter. Gilead was one of two Nebraska towns to have a woman mayor when Lorraine Gibson was elected in 1967. More recently Viola Gaston served as mayor until her death in 1990, succeeded by Loetta Krause. Changing horizons and problems of logistics have taken its toll in Gilead's population, which currently stands at 43, but the community spirit still endures. By Bernice J. Bauer, Rte 1 Box 115, Gilead, Hebron, 68370. History from Wikipedia and OldCompany.com (old stock certificate research service)