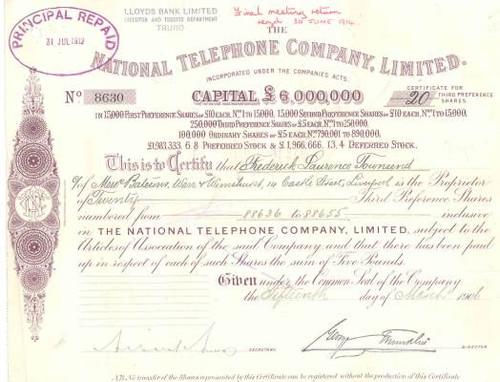 Beautifully engraved certificate from the National Telephone Company issued in 1906. This item is hand signed by the Company's Director and Secretary and is over 97 years old. The certificate has been folded otherwise EF+ The National Telephone Company traced its origins back to The Telephone Company, formed in 1878 to exploit Bell's telephone patents in Britain. It grew by various mergers and the creation of subsidiary companies, the name National Telephone Company first appearing in 1881. In 1889 the company merged with the United, the Lancashire and Cheshire Telephone Companies keeping the name of the National Telephone Company. The new concern had a capital of 4,000,000 and provided 23,585 lines. It continued to purchase smaller local operations around the country and it ended up sharing a virtual monopoly of the phone system in Britain with its main rival, The Post Office. However, when both the Bell and Edison master patents it owned expired in 1890 ands 1891, it faced a degree of competition from new operators, most of which was eventually seen off. The company developed call offices around the country and operated a long-distance trunk network, although this was the subject of compulsory purchase by the government in 1892. The NTC trunk lines eventually transferred in 1896. The company fought off further competition until it was taken over by The Post Office in 1912.