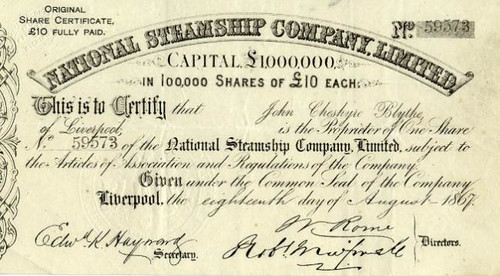 Beautifull certificate from the National Steamship Company, Limited issued in 1867. This item is hand signed by the Company's Directors and Secretary and is over 137 years old. The National Line (National Steam Navigation Company) was founded in Liverpool in 1863. The intent of the line was to sail from Liverpool to the Southern East Coast of the United States. However, due to the civil war, routes were set up to New York. The company was taken over by the Atlantic Transport Line and ran freight services only. The National line went into voluntary liquidation in 1914.