Beautifully engraved certificate from the Glencoe Cotton Mills issued in 1888. This historic document has an ornate border around it with a vignette of men transporting cotton on a donkey driven cart. This item is hand signed by J. H. Holt, Jr. and is over 117 years old. 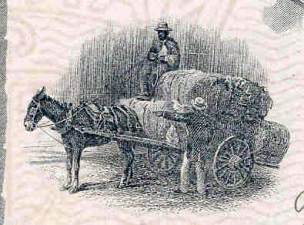 Certificate Vignette
Glencoe Mills, established in 1880 by James Henry Holt (1833- 1897) and William Erwin Holt (1839-1917), operated until 1954, producing cotton fabric. In 1951, the mill reported capitalization of $225,000; 5,736 spindles; and 220 looms. It operated with electric power, had a dye plant, and had finishing equipment. Glencoe Mills closed in 1954. Glencoe Mills was one of several mills owned and operated in Alamance County, N.C., by the Holt family. Edwin Michael Holt (1807-1884) started the Holt and Carrigan Cotton Mill in 1837. By 1860, it was called Alamance Cotton Mill and was famous for plaids. Edwin Michael Holt's sons, James Henry Holt and William Erwin Holt established Carolina Cotton Mills in 1869. Carolina Mills was operated by J. H. and W. E. Holt and Company. In 1879, James and William Holt acquired a building that had been a tobacco processing plant and that was a short way upstream from Carolina Mills. By 1880, they had installed cotton mill machinery and built mill tenement houses and a company store. They called the mill and the village Glencoe. This mill was only the fifth in the state of North Carolina and considered by some to be the country's first major cotton mill (Bluestone, 1975). Holt's "Alamance Plaids" soon became famous and as his operation grew rapidly. William Holt moved to Charlotte to be a banker, leaving James Holt to run Glencoe Mills. In 1890, James Henry Holt helped his sons, James Jr. (1864- 1924) and Robert (1866-1923) build Windsor Cotton Mills in Burlington. Windsor Mills was operated by R. L. and J. H. Holt and Company. In 1892, Holt helped sons Samuel (1862-1924) and William (1868-1916) build Lakeside Mills in Burlington. After James Henry Holt died in 1897, his sons Samuel and Ernest moved to Texas to be cattle ranchers. Robert Holt managed Glencoe, Carolina, Alamance, and Elmira Cotton Mills, and was almost sole owner of Glencoe Mills. In 1902, he retired from management of the other mills and devoted 100% of his time to Glencoe. When Robert Holt died in 1923, ownership of Glencoe Mill passed to his sister, Daisie Holt Green (1879-1976). Daisie Holt Green's husband, Walter Guerry Green (1868-1946), managed Glencoe Mills for a number of years. Green was a native of Sumter, S.C. He married Daisie Holt on 25 November 1902. Their son, Walter G. Green, Jr. (d. 1987), managed Glencoe Mills after his father. Walter Green, Jr., was an attorney. He married Irma Camman Jameson on 1 September 1934. He served in the U.S. Navy during World War II. Green was an active Republican in the 1950s and 1960s.

American Board of Commissions for Foreign Missions - 1856