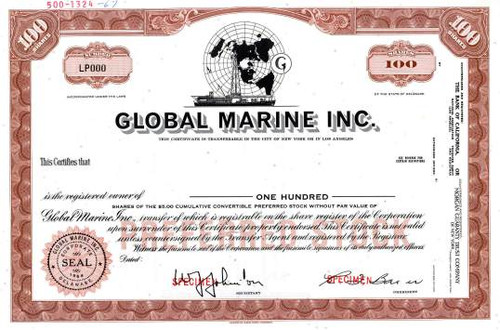 Beautifully engraved RARE SPECIMEN certificate from the Global Marine Inc. printed in 1967. This historic document was printed by the American Banknote Company and has an ornate border around it with a vignette of the Glomar Explorer with a map in the background. This item has the printed signatures of the Company's President and Secretary. This is the first time we have seen this certificate.

Certificate Vignette
Global Marine Inc., headquartered in Houston, is a premier offshore drilling contractor, providing drilling services on a dayrate basis or management services basis. In providing contract drilling services worldwide, the company uses its own fleet of 32 mobile offshore drilling rigs and crews. Global Marine is also the world's leader in offshore turnkey drilling, providing its drilling management services through two subsidiaries: Applied Drilling Technology Inc. and Global Marine Integrated Services-Europe. These subsidiaries operate primarily in the U.S. Gulf of Mexico and the North Sea, respectively. Global Marine's technical capability dates from the earliest days of the offshore drilling industry. The company first demonstrated the feasibility of drilling oil and gas wells at sea from a floating structure offshore California in 1953. The company also pioneered innovations in dynamic positioning, center-well drilling, horizontal pipe racking, and subsea television. The first drillship designed from the keel-up, the Cuss II, and the first operational dynamically-positioned vessel, the Glomar Challenger, were Global Marine designs. Global Marine played a leading role in design, construction, and operation of the Glomar Explorer. The Hughes Glomar Explorer was built in 1973 by Sun Shipbuilding and Drydock Co. for an intricate CIA undertaking. The mission of Glomar Explorer was to raise a Soviet nulear submarine that had sunk in the Pacific, resting on the ocean floor nearly 17,000 ft. (5,200 m) down. The Soviet Golf-II Class ballistic missile submarine sank on April 11, 1968, approximately 750 miles northwest of Hawaii. Naval intelligence at Pearl Harbor had tracked the submarine and learned of its fate through underwater listening devices. After months of futile searching by Soviet vessels, it became apparent that only the US knew the location of the sunken submarine. Oceanographers have long known that parts of the Pacific sea floor at depths between 14,000 ft. and 17,000 ft. are carpeted with so-called manganese nodules, potato-size chunks of manganese mixed with iron, nickel, cobalt and other useful metals. In the 1970s, Howard Hughes used the Deep Ocean Mining Project [DOMP] search for nodules as a cover for building the ship Glomar Explorer. Global Marine supervised construction of the Glomar Explorer , at a cost in excess of $200 million dollars, and operated it from 1973 to 1975 under contract to the US government. Glomar Explorer went to sea on June 20, 1974, found the sub, and began to bring a portion of it to the surface. The Soviets watched the "deep-sea mining" operation with interest, but did not attempt to thwart it. An accident during the lifting operation caused the fragile hulk to break apart, resulting in the loss of a critical portion of the submarine, its nuclear missles and crypto codes. However, according to other accounts, material recovered included three nuclear missles, two nuclear torpedoes, the ship's code machine, and various code books. From 1978 to 1980, Global Marine operated the ship in a deep-ocean mining test in water depths to 17,000 feet. The Explorer, which is 619 feet long and 116 feet wide, is owned by the US Navy. With the exception of the brief stint as a manganese module miner, the vessel has since been mothballed with the Naval Reserve Fleet in Suisun Bay CA, where it could be seen by cars crossing the Benicia bridge on U.S. Highway 680 east of San Francisco. About Specimens Specimen Certificates are actual certificates that have never been issued. They were usually kept by the printers in their permanent archives as their only example of a particular certificate. Sometimes you will see a hand stamp on the certificate that says "Do not remove from file". Specimens were also used to show prospective clients different types of certificate designs that were available. Specimen certificates are usually much scarcer than issued certificates. In fact, many times they are the only way to get a certificate for a particular company because the issued certificates were redeemed and destroyed. In a few instances, Specimen certificates we made for a company but were never used because a different design was chosen by the company. These certificates are normally stamped "Specimen" or they have small holes spelling the word specimen. Most of the time they don't have a serial number, or they have a serial number of 00000. This is an exciting sector of the hobby that grown in popularity and realized nice appreciation in value over the past several years.