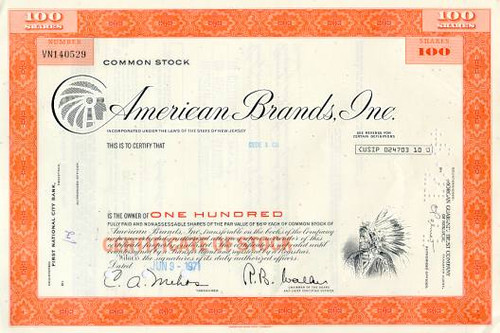 Beautifully engraved Certificate from the famous American Brands issued no later than 1971. This historic document was printed by the American Banknote Company and has an ornate border around it with a vignette of and Indian Chief. This item has the printed signatures of the company's officers and is over 35 years old. In October 1996, American Brands' announced it would split into two companies in an effort to boost stock and calm investor fears about tobacco litigation. The company said it will spin-off its British-based Gallaher Tobacco unit on the London Stock Exchange. Its remaining consumer brands will be grouped together in a U.S.-based company that will be renamed. Gallaher, the leading British cigarette maker, accounted for more than half of American Brands' $11.3 billion in sales in 1995, two years after it sold its American Tobacco Company. U.S. shareholders' received American depository receipts in a new, independent Gallaher's as well as stock in what is left of American Brands, which will be renamed Fortune Brands. With Cobra golf clubs, Titleist golf balls, Moen faucets, Swingline staplers and Jim Beam bourbon, the new company will be a dominant force in almost a dozen consumer product markets. The company also decided to change its name because it feared the old one remained too closely tied with tobacco. The company chose Fortune because it's a term synonymous with great prosperity and is also the name of its Australian liquor subsidiary, a division that has proven highly profitable.