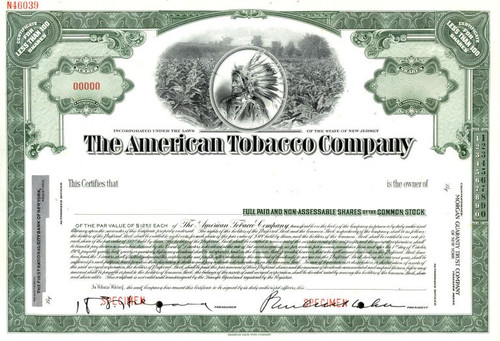 Beautifully engraved SCARCE specimen stock from the American Tobacco Company. This historic document was printed by the American Banknote Company and has an ornate border around it with a vignette of the Indian Chief, Powhattan -"Keeper of the leaf", and father of Pocahontas. This item has the printed signatures of the Company's officers. 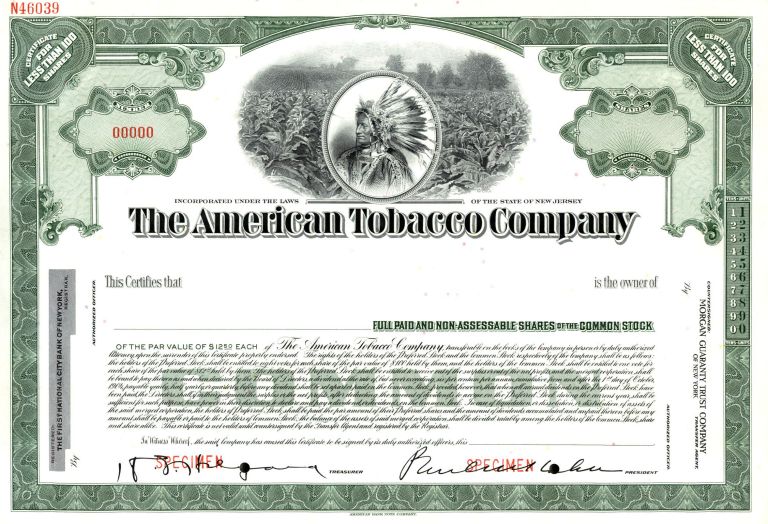 Certificate
The American Tobacco Company was a tobacco company founded in 1890 by J. B. Duke through a merger between a number of U.S. tobacco manufacturers including Allen and Ginter and Goodwin & Company. The company was one of the original 12 members of the Dow Jones Industrial Average in 1896. The American Tobacco Company dominated the industry by acquiring the Lucky Strike Company and over 200 other rival firms. Antitrust action begun in 1907 broke the company into several major companies in 1911. The American Tobacco Company restructured itself in 1969, forming a holding company called American Brands, Inc., which operated American Tobacco as a subsidiary. American Brands acquired a variety of non-tobacco businesses during the 1970s and 1980s, and sold its tobacco operations to Brown & Williamson in 1994. American Brands subsequently renamed itself Fortune Brands. History from Wikipedia, Encyberpedia and OldCompany.com (old stock certificate research service) About Specimen Certificates Specimen Certificates are actual certificates that have never been issued. They were usually kept by the printers in their permanent archives as their only example of a particular certificate. Sometimes you will see a hand stamp on the certificate that says "Do not remove from file". Specimens were also used to show prospective clients different types of certificate designs that were available. Specimen certificates are usually much scarcer than issued certificates. In fact, many times they are the only way to get a certificate for a particular company because the issued certificates were redeemed and destroyed. In a few instances, Specimen certificates were made for a company but were never used because a different design was chosen by the company. These certificates are normally stamped "Specimen" or they have small holes spelling the word specimen. Most of the time they don't have a serial number, or they have a serial number of 00000.