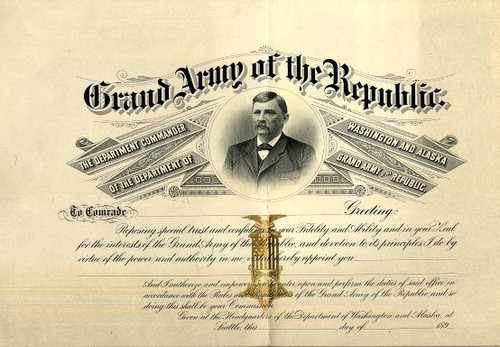 Beautifully RARE engraved specimen certificate from Grand Army of the Republic dated 1890's. This historic document was printed by the American Banknote company is over 111 years old. Stamped "Last Specimen - Not To Be Given Out" on back. 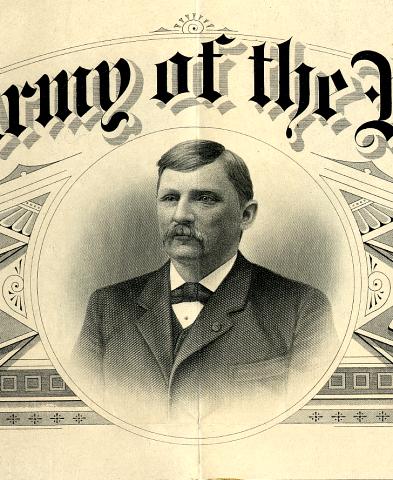 Certificate Vignette
THE GRAND ARMY of the REPUBLIC was organized, after the end of the Civil War, by Honorably Discharged Union Army Veterans. Although other Veterans groups were formed, the GAR was the largest and best known. Dr. B.F. Stephenson founded the GAR in 1866, but it almost disappeared during the early 1870's. About 1875, new leadership provided the platform for renewed growth. In 1890, the GAR reached it's largest membership, just over 490,000 members. State and federal leaders from President Lincoln on down, had promised to care for "those who have borne the burden, his widows and orphans," but they had little knowledge of how to accomplish the task. There was also little political pressure to see that the promises were kept. The GAR founded soldiers' homes, was active in relief work and pension legislation. It's motto was "FRATERNITY, CHARITY, AND LOYALTY". Five members were elected President of the United States and, for a time, it was impossible to be nominated on the Republican ticket without the endorsement of the GAR voting block. In 1949, the six surviving members permanently closed the GAR, as only Civil War Veterans were allowed to be members. The last Union Civil War Veteran died in 1956. About Specimens Specimen Certificates are actual certificates that have never been issued. They were usually kept by the printers in their permanent archives as their only example of a particular certificate. Sometimes you will see a hand stamp on the certificate that says "Do not remove from file". Specimens were also used to show prospective clients different types of certificate designs that were available. Specimen certificates are usually much scarcer than issued certificates. In fact, many times they are the only way to get a certificate for a particular company because the issued certificates were redeemed and destroyed. In a few instances, Specimen certificates we made for a company but were never used because a different design was chosen by the company. These certificates are normally stamped "Specimen" or they have small holes spelling the word specimen. Most of the time they don't have a serial number, or they have a serial number of 00000. This is an exciting sector of the hobby that grown in popularity over the past several years.

Schools of Michigan - To Her 13,000 Fallen Braves during Civil War - Michigan