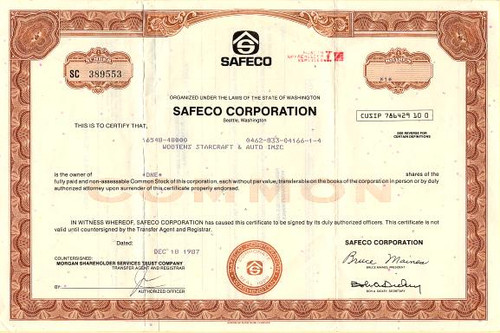 Beautiful certificate from the Safeco Corporation issued in 1987. This historic document was printed by American Banknote Company and has an ornate border around it with a vignette of the company logo. This item has the signatures of the Company's President and Secretary and is over 20 years old. 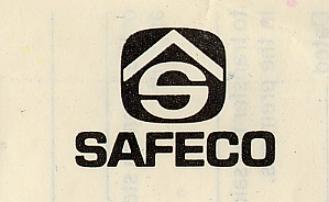 Certificate Vignette
Safeco Corporation (NYSE: SAF) is a major American national insurance company. It has naming rights to the Seattle Mariners' baseball stadium, Safeco Field. Safeco was founded in Seattle, Washington in 1923 by Hawthorne K. Dent as the General Insurance Company of America, a property and casualty insurer. This name is still used by Safeco on some of its insurance products.[1] Thirty years later the company founded the Selective Auto and Fire Insurance Company of America, or SAFECO. General Insurance's first headquarters were in downtown Seattle at the corner of University Street and Fourth Avenue. In 1936, it moved to the eight-story Brooklyn Building at the corner of N.E. 45th Street and Brooklyn Avenue N.E. in the University District. General Insurance began to sell life insurance in 1957. Eleven years later the corporate name changed from the General Insurance Company of America to SAFECO Corporation. (The company would end up changing the capitalization of its name from SAFECO to Safeco at the turn of the century.) Around the same time the company began to offer mutual funds and commercial credit (though precursors to the SAFECO Funds had been around since the 1930's). SAFECO replaced the Brooklyn Building with the 22-story Safeco Plaza building in 1973. It is the tallest building in the city outside Downtown. In 1997, SAFECO bought American States Financial Corporation to expand beyond the West Coast. Washington Mutual's WM Life Insurance Company was purchased the same year. Two years later SAFECO bought R.F. Bailey (Underwriting Agencies) Limited of London. In the 1999-2001 economic downturn, these purchases put a severe financial strain on the company, and new management was brought in to restructure the company. Approximately 40% of the workforce was laid off in three separate waves over the next two years. Commercial credit operations were sold to General Electric in 2001, and on March 15, 2004, the company announced the sale of its most profitable division, the life insurance and investments business, to a group of private investors led by Safeco board members and Warren Buffett's Berkshire Hathaway Inc. and White Mountains Insurance Group, Ltd., incorporating as Symetra Financial Corporation. The same day, it was announced that Hub International Ltd. was buying Safeco's insurance brokerage operations. Less than a month later, on April 12, it was announced that Mellon Financial Corporation would buy Safeco Trust Company, whose business is providing financial and estate planning services to individuals with over $1 million in assets. On August 2, the closure of Safeco Asset Management, the mutual-fund business, was announced. During this restructuring, CEO Mike McGavick was the 11th highest paid executive in the Pacific Northwest. On April 6, 2005, CEO Mike McGavick announced that Safeco would be consolidating operations at either the University District "home office" campus or the newer Eastside campus in Redmond, pending a competition between Microsoft and the University of Washington for the sale of one or the other location. On January 19, 2006 it was announced that Microsoft would purchase the Redmond campus for $209.5 million[3]. Plans were announced for a new 125-foot office tower across the street from Safeco Plaza to house the approximately 1,300 Redmond employees. However, McGavick subsequently stepped down as CEO to run for the U.S. Senate. In a surprise move, his replacement Paula Rosput Reynolds announced on August 30, 2006, that the entire University District complex would be sold as well, to the University of Washington for $130 million. Employees were told they would be moved to leased space in downtown Seattle. Some speculate this signalled the imminent sale of the company, although Safeco denies this. On June 27, 2007, Safeco introduced a new service - Teensurance aimed at "providing parents peace of mind while teens earn their freedom" History from Wikipedia and OldCompanyResearch.com (old stock certificate research service).