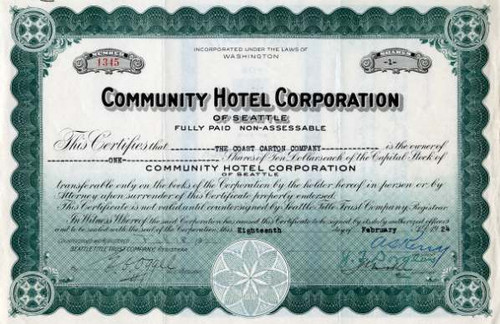 Beautifully engraved RARE certificate from the Community Hotel Corporation issued in 1924. This historic document was printed by N. P. Bank Note Company and has an ornate border around it. This item is hand signed by the Company's President ( Albert S. Kerry ), and Secretary ( J. T. Douglas ) and is over 80 years old. This is the first time we have seen this certificate for sale. In 1923, Albert S. Kerry was elected president of the Community Hotel Corporation and made a commitment to build the Olympic Hotel until it was completed and ready for customers. Kerry was president of the Chamber of Commerce, prior to taking on the job. The erection of steel began in January 1924, and work was completed by November in near-record time. The hotel cost approximately $5,500,000, of which $800,000 was for furnishings. The hotel was built on what was originally the site of the first campus of the University of Washington. The hotel is now called the Fairmont Olympic Hotel. The hotel was extensively remodeled over its life and in 1981 was restored to its original decor by the Four Seasons group. Fairmont Hotels and Resorts took over the Olympic's management in August 2003.