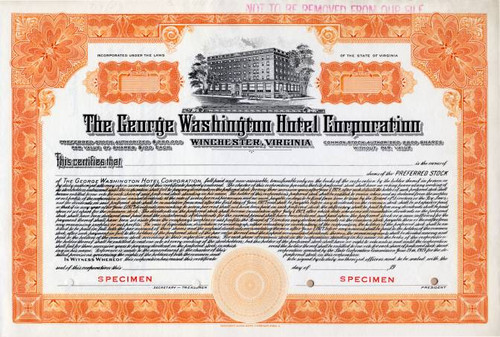 Beautiful RARE specimen certificate from the George Washington Hotel Corporation printed in 1924. This historic document was printed by the Security Bank Note Company and has an ornate border around it with a vignette of the hotel. 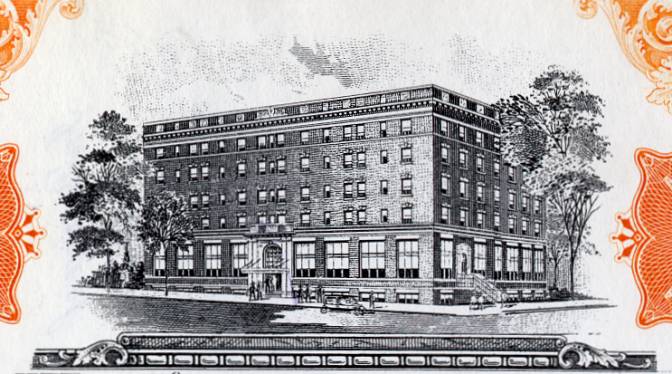 Certificate Vignette
The George Washington Hotel, is located in historic downtown Winchester, Virginia. Built in 1924 by The American Hotel Corporation, as part of there "Colonial Chain" of hotels. Like many hotels of the era, the property was built in close proximity of a B&O train station and was constructed to provide lodging to railroad passengers. Originally the five story hotel was built in an "L-shape," with a rear once-story kitchen wing. It contained 102 rooms and 45 baths. The lowest level contained a barber-shop, cafeteria, candy shop and men's furnishing shop. In 1929 and additional wing was added to the hotel, which provided 50 more guestrooms. In 1950 the property was remodeled to include a Howard Johnson's restaurant. The property remained a vital part of downtown Winchester, Virginia and has in the past been home to the headquarters of the Shenandoah Apple Blossom Festival. Over the years, a number of notable people have stayed at The George Washington Hotel. Guests have include Lucille Ball and Jack Dempsey among many others. With the construction of interstate highways and widespread availability of motor cars, railroad travel begin to decline. Undoubtedly, this change in travel, contributed to the closing of the property in 1978. It was then operated as The George Washington Home from Adults from 1978 to 1993. In 1993. The property then lay vacant until 2004. That year it was purchased and renovation work began which lasted until, the property reopened in April 2008. The property has undergone a complete renovation and revitalization. It now includes 90 guestrooms, an indoor pool and hottub, fitness room and restaurant, The Dancing Goat. It operates under the name The George Washington Hotel~ A Wyndham Historic Hotel. The property contains all the amenities of today, while capturing the historical elements which make it so unique. History from Encyberpedia and OldCompany.com (old stock certificate research service) About Specimen Certificates Specimen Certificates are actual certificates that have never been issued. They were usually kept by the printers in their permanent archives as their only example of a particular certificate. Sometimes you will see a hand stamp on the certificate that says "Do not remove from file". Specimens were also used to show prospective clients different types of certificate designs that were available. Specimen certificates are usually much scarcer than issued certificates. In fact, many times they are the only way to get a certificate for a particular company because the issued certificates were redeemed and destroyed. In a few instances, Specimen certificates were made for a company but were never used because a different design was chosen by the company. These certificates are normally stamped "Specimen" or they have small holes spelling the word specimen. Most of the time they don't have a serial number, or they have a serial number of 00000. This is an exciting sector of the hobby that has grown in popularity over the past several years.