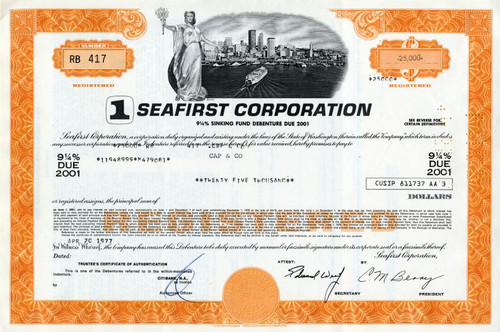 Beautiful $25,000 Bond Certificate from the Seafirst Corporation issued in 1977. This historic document was printed by the Security-Columbian United States Banknote Corporation and has an ornate border around it with a vignette of an allegorical woman holding a torch with a ferry moving toward downtown Seattle. This item has the printed signatures of the Company's officers. 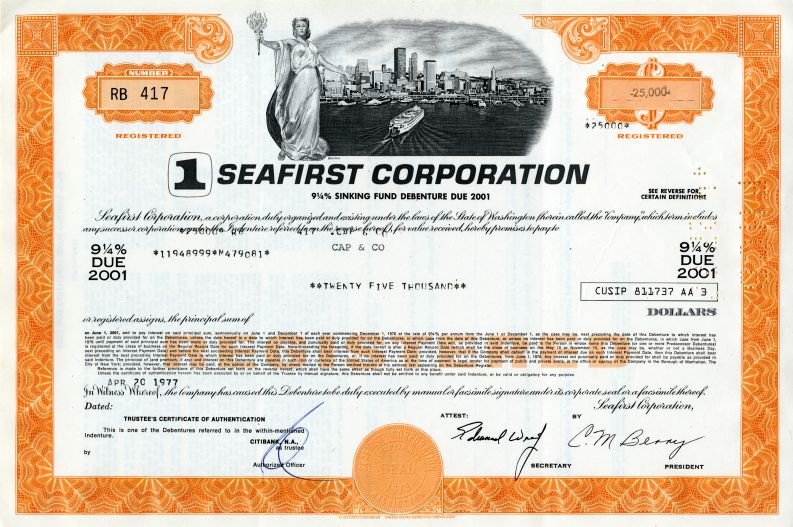 Certificate
Seafirst Corporation was a bank holding company based in Seattle, Washington. Formed on November 11, 1929, from the merger of Seattle's three largest banks, the First National Bank Group, the Dexter Horton National Bank (founded 1870 by Dexter Horton), and Seattle National Bank, the bank was originally named First Seattle Dexter Horton National Bank. In 1931, the bank changed its name to First National Bank of Seattle, and again in 1935 to Seattle-First National Bank. In 1944, the bank won a case before the US Supreme Court, United States v. Seattle-First Nat. Bank, by arguing that it did not have to pay a transfer tax when it converted from a state to a federally chartered bank. In 1970 it was using the name Firstbank; in 1974 the name Seafirst was adopted instead. Seafirst was acquired by BankAmerica Corp. in 1983, when Seafirst was at risk of seizure by the federal government after becoming insolvent following the demise of Oklahoma City-based Penn Square Bank. Seafirst had acquired a significant share of Penn Square's energy loan debt by participating in loans originated by that bank. Penn Square Bank collapsed in 1982, and the FDIC's decision to pay off only insured deposits rendered the participation assets valueless. The corporation and its primary subsidiary, Seattle-First National Bank, maintained the Seafirst Bank name and brand identity. During the 1980s and much of the 1990s Seafirst Bank maintained a high degree of autonomy and reigned as the largest bank in Washington. Following the 1998 merger of BankAmerica Corp. and NationsBank Corp. into the modern Bank of America Corporation, Seafirst finally assumed the Bank of America brand in 2000. History from Wikipedia, Encyberpedia and OldCompany.com (old stock certificate research service)