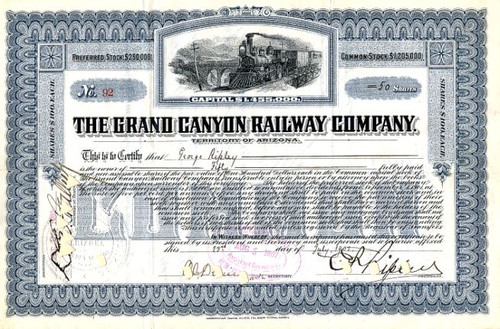 Beautifully engraved certificate from the Grand Canyon Railway Company issued in 1902. This historic document was printed by the American Banknote Company and has an ornate border around it with a vignette of train crossing a bridge. This item has the signatures of the Company's President and Secretary, and is over 106 years old. Punch cancelled.

Certificate Vignette
In 1901, the Atchison, Topeka and Santa Fe Railway completed a branch line from Williams to Grand Canyon Village at the South Rim. The first scheduled train to carry paying passengers of the Grand Canyon Railway arrived from Williams on September 17 of that year. The 64mile (103kilometer) long trip cost $3.95, and naturalist John Muir later commended the railroad for its limited environmental impact. To accommodate travelers, the Santa Fe designed and built the El Tovar Hotel, located just 20 feet (6 meters) from the Canyon Rim. El Tovar opened its doors in January 1905. Competition with the automobile forced the Santa Fe to cease operation of the Grand Canyon Railway in July 1968 (only three passengers were on the last run), although Santa Fe continued to use the tracks for freight until 1974. After 1974, the tracks were abandoned and many track side buildings were razed. Plans by entertainer Arthur Godfrey to bring the railway back to life in 1977 fell through. In addition, two other companies attempted to resurrect the line in 1980 and 1984, with each attempt helping to maintain interest in preserving the line and saving it from scrapping. A group photo of passengers from the first run of the Grand Canyon Railway in 1901.In 1988, the line was bought by a Phoenix, Arizona, couple, Max and Thelma Biegert. The railway was restored and in 1989 began operations as a separate company, independent of the Santa Fe. The first run of the restored railroad was on September 17, 1989, commemorating the September 17 debut of the original railroad. The railroad carries hundreds of passengers to and from the Canyon every day, totaling about 240,000 passengers in 2006. The restored Santa Fe Railway Station in Williams now serves the Grand Canyon Railway, and is also home to a small railroad museum. The Grand Canyon Depot, owned by the National Park Service, remains the northern terminus for passengers of the line. During the summer, the railroad operates steam locomotives, but otherwise uses reconditioned 1950s vintage diesel locomotives (ALCO-MLW FPA4s) for the remainder of the season. Passengers ride in restored 1920s vintage Harriman coaches and new 1950s climate controlled coaches. The railroad adds to the Old West experience by having actors dressed as bandits stage a mock train robbery during the return trip from the Grand Canyon to Williams. During the winter season (November - January), the line runs The Polar Express from Williams to the 'North Pole', a station about 10 miles (20 km) north of town. In 2005, this winter service carried 65,000 passengers. In February 2006, the Grand Canyon Railway announced that it had established a new logo that unifies all of the operating divisions of the company. The new 'glyph' style "G" herald harkens to the native American petroglyphs common in Northern Arizona. As of June 2007, the logo only seems to be applied to merchandise, signs, and official company letterhead, as several cars have come into service or been repainted while retaining the "drumhead" logo on the sides. Even freshly painted locomotives MLW FA-4 #6793 and steam locomotive # 4960 have retained the old logo. Diesel locomotive at sunset, in Williams, ArizonaIn March 2006, owners Max & Thelma Biegert announced to the media that they were placing the railroad and its associated restaurants, hotels and amenities up for sale. The combined properties have an annual revenue of nearly $40 million. The Biegerts are seeking a new buyer/operator with a possible theme park background, which will ensure that the railroad, hotels, RV park, restaurants (and a possible new amusement park in Williams) will continue to be operated as one entity. On September 21, 2006, it was announced that Xanterra Parks & Resorts of Denver, CO, had submitted the winning bid (for an undisclosed sum) and was selected as the new owner for the Grand Canyon Railway. Xanterra is the current operator of the Grand Canyon National Park's hotel, restaurant and store concessions, as well as National Park Service concessions of many other national parks throughout the nation. Xanterra is the corporate name and identity for what was originally known as 'The Fred Harvey Company', a legendary company with restaurant, hotel and service ties to the Atchison, Topeka & Santa Fe Railway as far back as the 1876. Xanterra said that it intends to keep all 480 of the Railway's current employees, and plans on focusing on growing the business and increasing the coordination between the Railway and Xanterra's other services in the Grand Canyon National Park's South Rim. In the press release, the Railway and Xanterra reported over 225,000 passengers and over $38 million in revenue in calendar year 2005. The purchase of the GCR includes all of the Railway's assets, land, depots, hotels, RV park, rolling stock, shops and linear pieces of land along the 65-mile (105 km) line. The Biegert family's 480-acre (1.9 km²) ranch near Gonzales Lake in north Williams was not included in the sale to Xanterra. History from Wikipedia and OldCompanyResearch.com (old stock certificate research service).