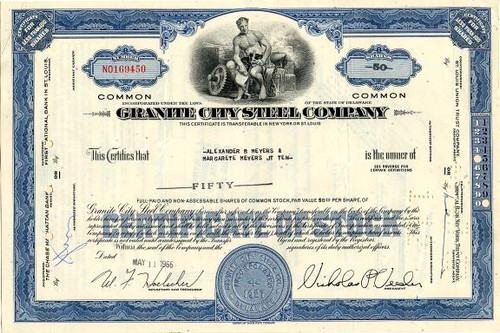 Beautiful certificate from the Granite City Steel Company issued no later than 1967. This historic document was printed by American Banknote Company and has an ornate border around it with a vignette of an allegorical man. This item has the printed signatures of the Company's President and Secretary and is over 40 years old. 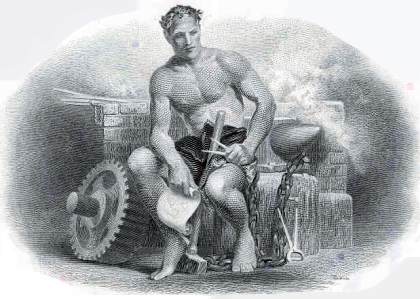 Certificate Vignette
May 20, 2003 Acquisition complete: Granite City Steel now U.S. Steel National Steel's Granite City division is now part of U.S. Steel, as the Pittsburgh-based U.S. Steel has completed its acquisition of National. On Monday the United Steelworkers of America agreed on a new labor contract covering employees from both companies. The U.S. Bankruptcy Court approved U.S. Steel's acquisition offer for bankrupt National Steel Corp. in April. More than 2,800, or nearly one-third, of National Steel's 8,400 employees work at its Granite City division. "This day is not about the closing of a transaction, rather it is about the opening of anew chapter in the history of the American steel industry," said Thomas Usher, chairman and chief executive of U.S. Steel, in a statement. In a separate announcement, the company named Merle Stein general manager of Granite City Works, and Karl Kocsis manager of employee relations. Stein, 53, has been with the U.S. Steel since 1970, and Kocsis, 35, has been with the company since 1989. With the acquisition of National, of Mishawaka, Ind., U.S. Steel (NYSE: X) becomes the biggest steel producer in the country.