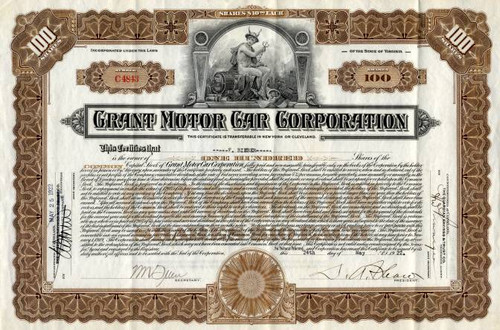 Beautiful certificate from the Grant Motor Car Company issued in 1922. This historic document was printed by the Western Bank Note Company and has an ornate border around it with a vignette of an allegorical figure. This item has the original signatures of the Company's President, David A. shaw and Secretary, and is over 91 years old. 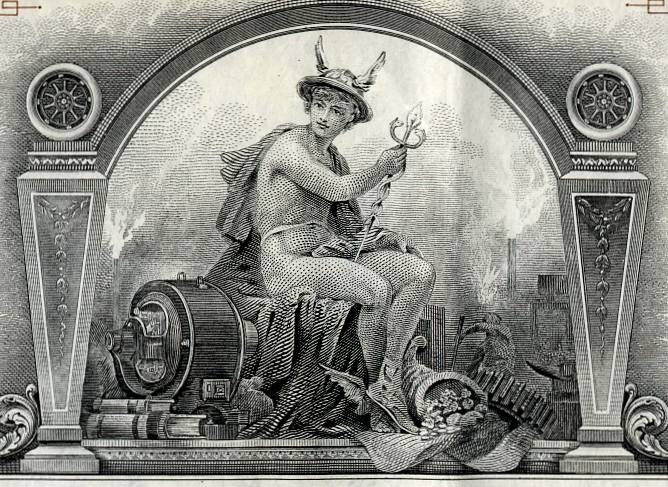 Certificate Vignette
The Grant Motor Co was a United States automobile manufacturing company which produced automobiles from 1913 to 1922. The company was based in Findlay, Ohio. The company produced several thousand four and six cylinder automobiles and even exported cars to England as the Whiting-Grant. Of all the new automobile ventures establishing themselves in business in 1913, the Grant Motor Company of Detroit certainly seemed to be the most solidly based for future success in the country. George Grant and his brother Charles, president and vice-president respectively, had established their automobile dealership at 1000 Woorward Avenue soon after the turn of the century and owned a successful machine foundry as well. Secretary-treasurer David Shaw had been treasurer for the Simplex Motor Car Company in Indiana. Chief engineer James Howe, a Cornell graduate, had held high positions in the engineering departments of Thomas, Cunningham and Selden in New York State, and Studebaker in Indiana. Factory manager George Salzman had built his first experimental gasoline car in Boston in 1897 and thereafter had been production manager for Thomas and Simplex. General sales manager George Waite had served in that same sales position for Thomas and Simplex too, having learned his trade with Alvin Fuller, the dynamic Boston dealer for Packard. As the Automobile Trade Journal pointed out, this group of men constitutes a galaxy of automobile experts whose experience cannot but guarantee the excellence of the product they are turning out.The car had been designed by Salzman and refined by Howe, and was, as its makers rather modestly put it, a thoroughly good low-priced car. The Grant's problem was that it arrived during the cyclecar frenzy and although the company and knowledgeable reporters insisted the vehicle was a miniature motor car, they had little luck in convincing the general populace of this. The Grant was a natty little two-seater roadster on a 90-inch wheelbase with standard 56-inch tread. It was powered by a four-cylinder 12 hp water-cooled engine. It featured shaft drive, a sliding gear transmission, drop forged front axle, and a three-point suspension arrangement of full elliptic springs at the front, semi-elliptic at the rear placed crosswise back of the rear axle. It had perky drum headlamps, nicely curved fenders and sprightly but substantial wire wheels. And its price tag was $495. As a sports car, which the Grant really was (in the much later M.G. TC tradition), it was really a honey. After a small production run in temporary headquarters in Detroit in 1913, the firm moved into the plant of the defunct Findlay Motor Company of Ohio in November of 1913. In 1914 a total of 3,000 of these little Grants was produced, but with the cyclecar onus hanging heavy, the line was expanded in 1915 to include a larger six-cylinder car. Production increased to 2100 that year. An even larger six was introduced in 1916, and the wonderful little four was dropped, but Grant quality remained high, and Grant prices attractively low. Grant was reorganized as Grant Motor Car Corporation that year, and a new plant said to have a 35,000 annual production capacity was opened in Cleveland that fall. Optimism reigned. production for 1916 totaled a few more than 4,000 cars, in 1917 in Cleveland it shot up to 12,000. The 1920 Grant Six (product of the Grant Motor Car Corporation of Cleveland, Ohio * ) had a 116-inch wheelbase and a 6-cylinder valve-in-head engine. The 5-passenger touring car and 3-passenger roadster were priced at $1595. The price tag on the closed models, the 4-passenger coupe and the 5-passenger sedan, was $2450. The 1920 Grant sedan differed from many closed cars in that it had no sun-visor over the windshield, and just a slight roof overhang. The sedan was upholstered in blue-grey silk velour. In addition to cord tires, cowl lamps and a ventilator, the sedan had a built-in floor heater of the type that carried excess heat from the exhaust pipe. As in other cars, the heater grate was located between the front and rear seats. These floor heaters added a touch of luxury to many medium- and high-priced sedans of the early 1920s. As a rule, the flow of heat could be cut off when not needed, by merely closing a flue. Unlike the many manufacturers who cut prices, Grant was forced to raise its prices for the Autumn season of 1920. It was an inopportune time for an increase, and before long the Grant Six was withdrawn from the market. Few examples of this car remain today. In the 1930s, there were many campaigns to remove and destroy all "worthless" old cars with two-wheel brakes and other unsafe equipment. Many Grant cars met destruction in those "roundups". * (The factory was later purchased by General Motors.) 1920 Grant info from the book: Cars of the Early Twenties by Tad Burness 1968 History from Wikipedia and OldCompany.com (old stock certificate research service)