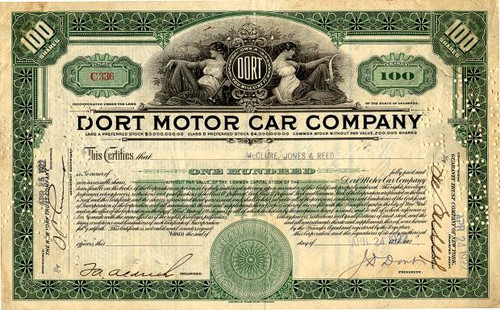 Beautiful certificate from the Dort Motor Car Company issued in 1922. This historic document was printed by American Bank Note Company and has an ornate border around it with a vignette of two reclining females at top center. This item has the signatures of the Company's President, Josiah Dallas Dort and Treasurer and is over 85 years old.

Certificate Vignette
The Dort was an automobile built by the Dort Motor Car Company of Flint, Michigan from 1915 - 1924. Dort used Lycoming built engines to power their vehicles. Dort Motor Car traced its history back to its founding as the Flint Road Cart Company in 1884 by William Crapo Durant and Josiah Dallas Dort, who sold wagons, built by local suppliers for $8 a piece. In 1900, the company which by now was making 50,000 annually wagons, carts and carriages changed to Durant Dort Carriage Company. Durant and Dort's largest competitor in the area was Flint Wagon Works, which acquired Buick Motors in 1903. Durant and Dort wanted to begin automobile production, and Billy Durant acquired Chevrolet with Dort's backing. Dort was a Director and Vice President of Chevrolet in 1912; in 1913 Dort stepped down and by 1915 he and Durant cut their business ties. Dort continued manufacturing cars until 1924, when the mounting price of development and distribution of the vehicles made it impossible to compete in the automotive markets of the 1920s. Josiah Dallas Dort's death in 1925 sealed the fate of Dort Motors. Josiah Dallas Dort 1861-1925 Josiah Dallas Dort was born Feb. 2, 1861, in Inkster, MI. In the spring of 1886, he and William C. Durant, a successful insurance man, formed a partnership which was to have a profound effect on Flint and the American auto industry. That summer, both Dort and Durant founded the Flint Road Cart Co., but later changed the name to Durant-Dort Carriage Co. which was the largest builder of passenger vehicles in the world. In 1914 he began the liquidation of the carriage company and in 1915 founded the Dort Motor Co.which was dissolved in 1923. He was also the founder of the Imperial Wheel Co., the Flint Varnish Works, The Flint Axle Works and many other companies. Dort founded Flint Vehicles Factories Mutual Benefit Association which was the forerunner of the Industrial Mutual Association. He was a director of the Genesee County Savings Bank and president of the Carriage Builders' National Association. He helped draft the law creating the Michigan Railroad Commission and served on the city planning and park boards. He was an active member in the planning of the Flint YMCA and the first city hospital, which is now Hurley Medical Center. During WWI, he devoted most of his two years to Liberty Bonds and other patriotic activities. Dort achieved national recognition on Feb. 6, 1918, when the New York Times published an account of Flint's achievement, under Dort's leadership, in exceeding its war bond campaign by 30 percent. In 1925 Dort's death left the entire city in mourning. The Dort home on Kearsley St. was the first home of the Flint Institute of Music and is the site of the current building. History from Wikipedia and OldCompanyResearch.com.