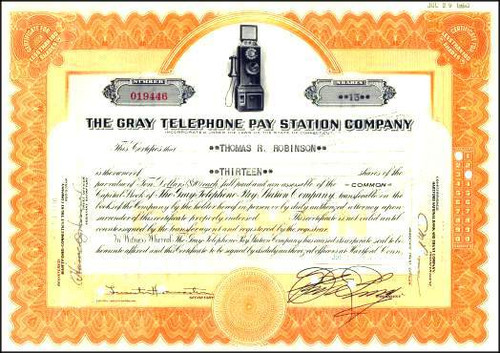 Beautifully engraved certificate from the Gray Telephone Pay Station Company issued no later than 1936. This historic document has an ornate border around it with a vignette of an early coin collector telephone. This item has the hand signatures of the Company's President ( George A. Long ) and Secretary ( Edward A. Hagey ) and is over 68 years old. 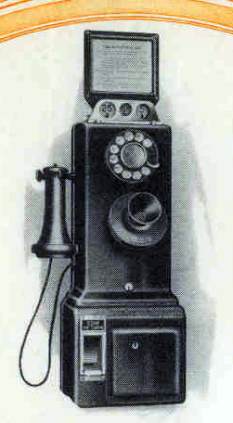 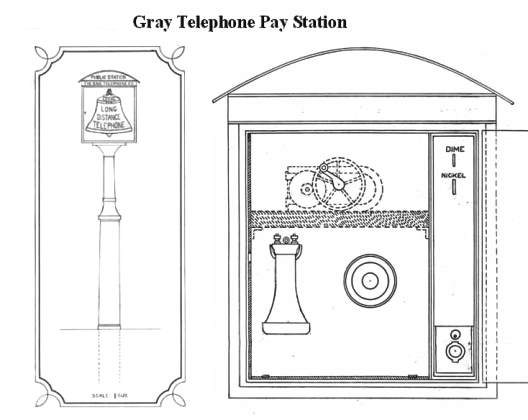 Early Pay Station Desgin
In 1887, a man had a desperate need for the use of a phone, and one could not be found. This need lead to an idea and on April 5 1888, William Gray filed the first of 23 paystation patents. This patent lead to the founding of the Gray Telephone Pay Station Company in 1891. At first the new product did not win the demand Gray had hoped for. Gray decided to sell this new idea to three important institutions: the telephone companies, hotel and store owners, and the general public. Gray was able to convince the telephone companies that they were losing money by not having his product, since the consumer would just find another way to communicate. William Gray and the Pay Telephone From 1888 to 1902 Gray filed 23 patents for pay telephones with a slot for coins. In 1891, the Gray Telephone Pay Station Company was formed. The pay phone drove the telephone industry and helped create demand for household telephones. Use of telephones in World War II created consumer expectation and demand for telephones in every home. Today 95% of households have telephones (98% have televisions). The spread of pay phones grew as the Interstate Highway System extended across the country -- as people traveled more, the need for access to telephone service became a necessity in the event of trouble on the roads. In 1910 Western Electric and Gray Manufacturing joined forces and produced the first "50A series coin collector". This basic design was so reliable and practical that it remained in production for 60 years. It was modified and upgraded numerous times.