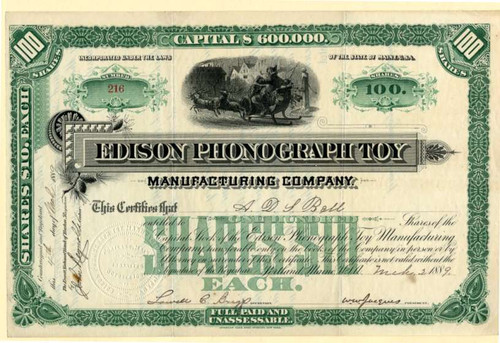 Beautifully engraved SCARCE stock certificate from Edison Phonograph Toy Manufacturing Company issued in 1889. This historic document was printed by the American Banknote Company, New York and has an ornate border around it with a vignette of Santa Claus and his reindeer. This item has the signatures of the Company's President, William W. Jacques and Secretary, Lowell Briggs. 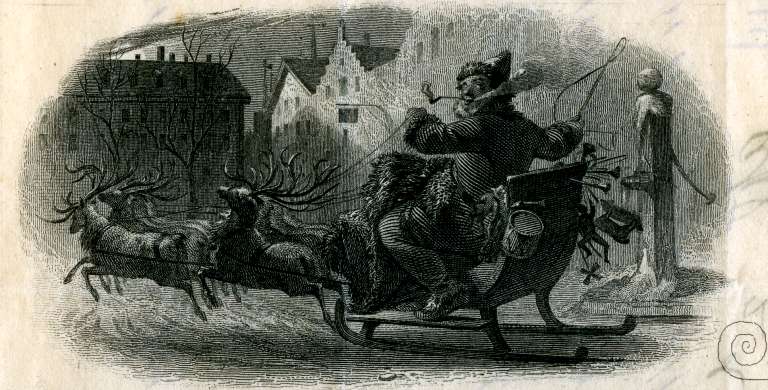 Certificate Vignette
The Edison Phonograph Toy Manufacturing Company was incorporated in Maine in 1887 and maintained offices in Boston and New York. It sold phonograph dolls using Edison's phonograph patents. The business was closed in 1895. Edison had envisioned the idea of a talking doll as early as 1877, but it was another inventor, William W. Jacques, who first developed a prototype based on Edison's original tinfoil phonograph. Jacques and his partner Lowell Briggs founded the Edison Phonograph Toy Manufacturing Company in 1887 with Edison agreeing to lend his name to the planned product in return for royalties and stock ownership. Before production began, however, Edison took over the company, demoting the founder and leading to years of ill-will and lawsuits. Edison's Talking Doll was an historic step in phonograph history -- the first phonograph marketed for home entertainment, with a pre-recorded cylinder. The doll stands 22" high and weighs four pounds, with a metal body, articulated wooden limbs, and an imported Simon and Halbig #719 bisque head. The original price was $10 with a simple chemise, and $20-$25 with full dress. This was a huge sum for the time, equal to about two weeks salary for the average person. The phonograph inside the body of the doll was tiny, with a small horn pointing up toward holes in the doll's chest. Cylinders were not interchangeable. There was no spring motor so the child was expected to turn the crank by hand at a steady speed in order for the doll to recite the six-second pre-recorded nursery rhyme. (Edison was later quoted as admitting that "the voices of the little monsters were exceedingly unpleasant to hear.") Unfortunately the delicate mechanism was too fragile for rough usage, and the steel stylus caused the wax record to wear out extremely rapidly. 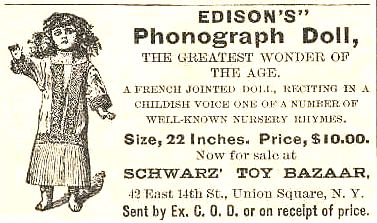 Early Ad for Doll
The first dolls were offered for sale on April 7, 1890. Although 2,500 had been shipped by Edison to the Toy Manufacturing Company in March, less than 500 completed dolls were actually sold and most of those were returned by unhappy customers. Production ceased at the beginning of May, 1890 and the dolls were withdrawn from the market. Returned dolls, along with the large remaining stocks of unsold dolls at the Edison factory, were sold off cheaply with the phonographs removed. All Edison dolls are very scarce today but those with their original phonograph intact are extremely rare, with only a few survivors known to exist. April 26, 1890 - Scientific American article entitled "Edison's Phonographic Doll" The new "talking doll industry," established upon the basis of the Edison phonograph, has reached such proportions as to entitle it to more than a passing notice. At Orange, N. J.,. within a short walk of the world-renowned laboratory of Edison, are located a number of buildings occupying a ground space of many acres, in which over 500 people are engaged in the manufacture of the phonograph in its two principal forms, one of which is the commercial instruument repeatedly descibed in our columns, the other the phonographic doll, which we now present to our readers for the first time. This interesting toy forms an attractive object at the the Exhibition of the Wonders of Electricity now in progerss at the Lenox Lyceum, in this city. As near as we can judge from a tour of the works, about one-half of the plant is devoted to the doll industry. Necessarily much of the mechanism of the doll is made in the regular phonograph works; but the adjustments, the manufacture of the record cylinders which determine the story which the doll shall tell, as well as the packing and shpping, are all conducted in an extensive buiding exclusively devoted to the manufacture of talking doll. The finished doll, shown in the upper left hand figure of our engraving, has the same appearance as other dolls; but its body is made of tin, and the interior thereof is filled with mechanism very much like that of the commercial phonograph, but of course much more simple and inexpensive. The cylinder of the phonograph of the talking doll is mounted on a sleeve which slides upon the shaft, the sleeve being screw-threaded so as to cause the cylinder to move lengthwise of the shaft. A key is provided by which the cylinder may be thrown out of engagement with the segmental nut, and a spiral spring is provided for returning the cylinder to the point of starting. The cylinder carries a ring of wax-like material, upon which is recorded the speech or song to be repeated by the doll. Upon the same shaft with the record cylinder there is a large pulley wich carries a belt for driving the flywheel shaft at the lower part of the phonographic apparatus. The key is fitted to the main shaft, by which the phonographic cylinder is rotated, and the flywheel tends to maintain a uniform speed.