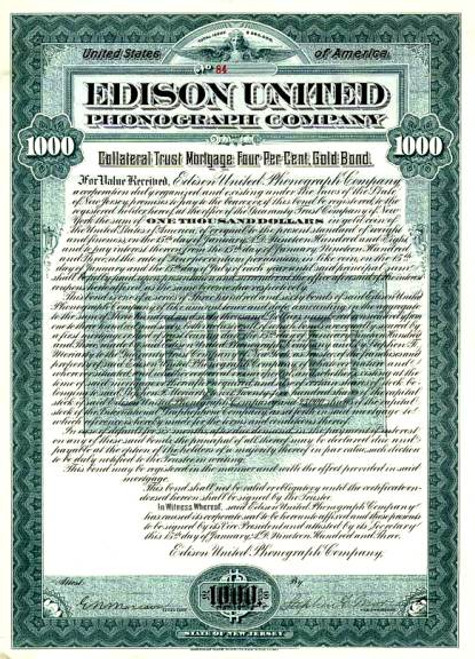 Beautifully engraved $1,000 Gold Bond Certificate from the Edison United Phonograph Company issued in 1903. This historic document was printed by the American Banknote Company and has an ornate border around it with a vignette of an allegorical head with wings at top center. This item has the signatures of the Company's Vice President, Stephen F. Moriarty and Secretary, E. N Morison and is over 102 years old. This company was an attempt to reorganize the Edison United Phonograph Company which had been organized in New Jersey on February 24, 1890, to manufacture and market phonographs and graphophones outside of the United States and Canada. It had complex stock and contractual relations with Edison, the Edison Phonograph Works, and the International Graphophone Company. The New York banking house of J. & W. Seligman & Company and its associate firms in foreign countries were the bankers and financial agents of the firm. The company entered receivership in the spring of 1894; it was probably dissolved in 1902 and this financing appears to be an attempt to fund a reorganization of the company. It is signed by long time Edison associate Stephen F. Moriarty as vice-president. The text of the bond indicates the issue was made by the said "Edison United Phonograph Company and by Stephen F. Moriarty to the Guaranty Trust Company of New York, as Trustee of the franchises and property of siad Edison United Phonograph Company of whatever nature and wherever situated..." Additionally, Moriarty, as security for this issue of bonds was required to put up "twenty-five hundred shares of the capital stock of the said Edison United Phonograph Company and 45,000 shares of the capital stock of International Graphophone Company..." An Extremely Scarce Edison piece. Uncancelled and Extremely Fine.