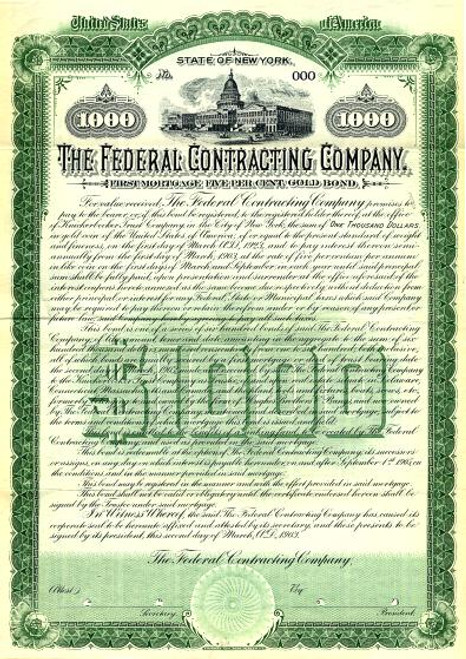 Beautifully engraved RARE specimen certificate from Federal Contracting Company dated 1903. This historic document was printed by Franklin-Lee Bank Note Company and has an ornate border around it with a vignette of the U.S. Capitol. This item is over 103 years old. 40 coupons attached. This is the first time we have had this for sale and we only have one. 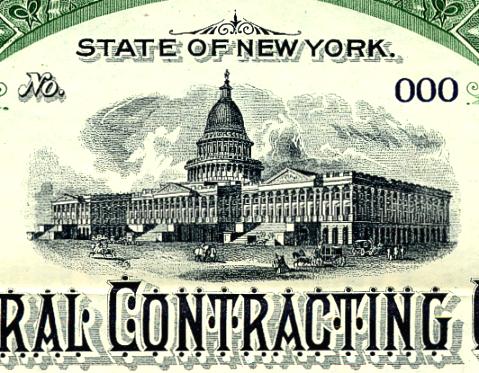 Certificate Vignette
Gold Bonds Many times Bonds were Payable in Gold or Gold Coin to give the impression that they were a more secure investment. In reality, they were not more secure since there wasn't any gold set aside as collateral for these bonds. On April 5, 1933, President Franklin D. Roosevelt signed Presidential Executive Order 6102 which invoked his authority to make it unlawful to own or hold gold coins, gold bullion, or gold certificates. The export of Gold for purposes of payment was also outlawed, except under license from the Treasury. On January 30, 1934, the Gold Reserve Act became law which made the ownership of gold illegal except for coins of numismatic value. As a result of this law, Bonds were no longer allowed to be Payable in Gold. About Specimens Specimen Certificates are actual certificates that have never been issued. They were usually kept by the printers in their permanent archives as their only example of a particular certificate. Sometimes you will see a hand stamp on the certificate that says "Do not remove from file". Specimens were also used to show prospective clients different types of certificate designs that were available. Specimen certificates are usually much scarcer than issued certificates. In fact, many times they are the only way to get a certificate for a particular company because the issued certificates were redeemed and destroyed. In a few instances, Specimen certificates we made for a company but were never used because a different design was chosen by the company. These certificates are normally stamped "Specimen" or they have small holes spelling the word specimen. Most of the time they don't have a serial number, or they have a serial number of 00000. This is an exciting sector of the hobby that grown in popularity over the past several years.