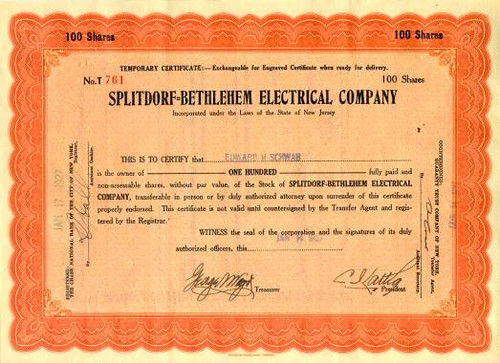 Beautifully engraved certificate from the Splitdorf-Bethlehem Electrical Company issued no later than 1928. This historic document was printed by the American Banknote Company and has an ornate border around it. This item is hand signed by the company's president and treasurer and is over 82 years old. Edison entered into the radio business in 1928 by taking over the Splitdorf-Bethlehem Electrical Company of Newark, a move which allowed him to produce radio-phonographs. The Edison Company further expanded into the field of radio by making programs for radio on long-playing discs. Radio station WAAM of Newark, New Jersey, agreed to use the new Rayediphonic Reproducing Machine and Radiosonic records in 1929, with the first Radiosonic broadcast being aired on April 4. It appeared that the company had finally found a profitable outlet. The Edison Company purchased the Splitdorf Radio Company on January 14, 1929, and Charles Edison was elected president. This was a way to get a leg up on the design of their first radio line and secure RCA and Hazeltine patent licenses. The patents were needed in order to legally manufacture and sell competitive radios at that time. The first line of Edison neutrodyne radios was introduced around March 1929. The name of the Phonograph Division was changed to the Radio-Phonograph Division in May 1929, with the national introduction of the line at the 1929 RMA Radio Show and Convention. The model numbers of the in the initial products were: R-1, R-2, C-2 and C-1. At about this time the Edison company was losing substantial amounts of money on phonograph and record manufacture and sale, saw little chance of improvement and decided to close all its phonograph related manufacturing and sale activities. That was done on Oct. 29 1929, in order to stop the losses and concentrate on radio manufacture and sale. The design for a complex, modern, screen-grid radio was being finalized for introduction at the Sixth Annual Convention and Trade Show of the Radio Manufacturers' Association in Atlantic City, N. J. on June 2, 1930, during the first half of 1930 (I think Theodore Edison led the design, but I'm not sure). The first model numbers were R-6 and R-7 (different cabinets, same chassis). Minutes of two series of weekly meetings at the Edison Company in the first half of 1930 are linked in the table below. The first is called "Radio Committee Meeting Minutes" and contains discussion of various design and production issues as they came up. The second is called "Meeting for Discussion of 1930 Radio Design". Design and performance issues are discussed, along with progress in completing the first 50 sample radios. The GREAT DEPRESSION took a terrific toll on most industry. Unfortunately, the Edison radio effort was badly hurt. They started late, just before savage price cutting swept the industry. The Splitdorf Radio Company ceased operations on Dec. 31, 1930 and Edison exited the home radio field. The Splitdorf Company made radios, magnetos, lighting systems, spark plugs and other electrical products. They had manufacturing operations in Newark N.J. and in Canada and produced radios throughout the 1920's. The company merged with the Thomas Edison Company in early 1930's. In addition, the Splitdorf Electrical Co. of Newark, New Jersey manufactured at least 12 different motorcycle generators from 1918 to 1931. The company was founded by C. F. Splintdorf. The Splitdorf - Bethlehem Electrical Company was a venture between Bethlehem Steel and Splitdorf Electrical Company. Bethlehem Steel was run by Charles Schwab (Senior) at the time these certificates were issued. This certificate was issued to Edward H. Schwab and signed by him on the verso. History from Wikipedia and OldCompany.com (old stock certificate research service).