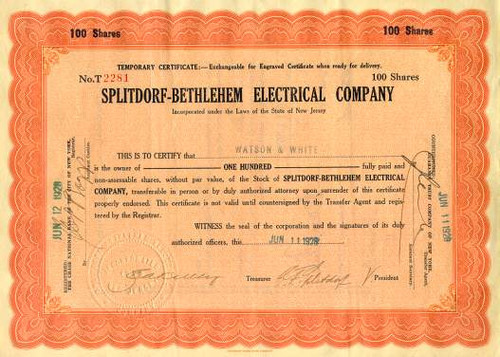 Beautifully engraved certificate from the Splitdorf-Bethlehem Electrical Company issued in 1928. This historic document was printed by the American Banknote Company and has an ornate border around it. This item is hand signed by the company's vice-president, C. F. Splintdorf and treasurer, E. A. Kelly and is over 73 years old. The Splitdorf Company made radios, magnetos, lighting systems, spark plugs and other electrical products. They had manufacturing operations in Newark N.J. and in Canada and produced radios throughout the 1920's. The company merged with the Thomas Edison Company in early 1930's. In addition, the Splitdorf Electrical Co. of Newark, New Jersey manufactured at least 12 different motorcycle generators from 1918 to 1931. The company was founded by C. F. Splintdorf. The Splitdorf - Bethlehem Electrical Company was a venture between Bethlehem Steel and Splitdorf Electrical Company.