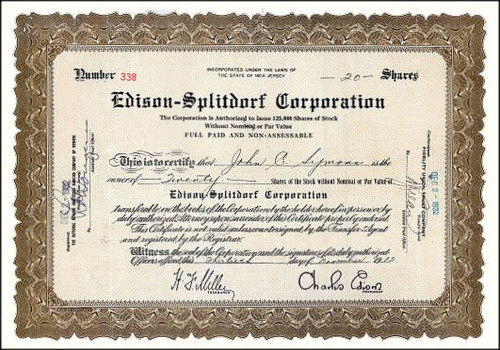 Beautifully engraved certificate from the Edison-Splitdorf Corporation issued in 1932 and 1933. This historic document has the printed signatures of the Company's President, Charles Edison and Treasurer, H. F. Miller and is over 74 years old. Edison's association with radio manufacture came about when his company purchased the Splitdorf Radio Corporation of Newark in New Jersey, USA around 1928. Along with many other manufacturers in the 1920s, Splitdorf had been caught out producing too many radios for a contracting market at the beginning of the depression. As a result, the near-bankrupt company was taken over by Edison to become the Radio Division of Thomas A. Edison Inc called the Edison - Splitdorf Corporation. Edison - Splitdorf Corporation also made magnetos, lighting systems, spark plugs and other electrical products Charles Edison (August 3, 1890 July 31, 1969), son of Thomas Edison, was a businessman, Assistant and then Acting Secretary of the Navy, and served as the 42nd Governor of New Jersey. Born at his parents' home, Glenmont, in West Orange, New Jersey, he attended the Hotchkiss School in Lakeville, Connecticut. He married his college sweetheart Carolyn Hawkins on March 27, 1918. For a number of years Charles Edison ran Edison Records. Charles became president of his father's company Thomas A. Edison, Inc. in 1927, and ran it until it was sold in 1959. In 1937, President Roosevelt appointed Charles Edison as Assistant Secretary of the Navy, then as Acting Secretary on January 2, 1940, Claude A. Swanson having died several months previously. Edison himself only kept the job until June 24, resigning to run his gubernatorial campaign. During his time in the Navy department, he advocated construction of the large Iowa-class battleships, and that one of them be built at the Philadelphia Navy Yard, which secured votes for Roosevelt in Pennsylvania and New Jersey in the 1940 presidential election; in return, Roosevelt had BB-62 named the USS New Jersey. In 1940, he won election as Governor of New Jersey, running in reaction to the political machine run by Frank Hague, but broke with family tradition by declaring himself a Democrat. As governor, he proposed updating the New Jersey State Constitution. Although it failed in a referendum and nothing was changed during his tenure, state legislators did reform the constitution later. In 1948, he established a charitable foundation, originally called "The Brook Foundation", now the Charles Edison Fund. Between 1951 and 1969, he lived in the Waldorf-Astoria Hotel, where he struck up a friendship with Herbert Hoover, who also lived there. In 1962, Edison was one of the founders of the Conservative Party of New York State. His personal mascot was the owl, and he collected objects depicting owls. Charles Edison died on July 31, 1969 in New York City.[1] He is buried in Rosedale Cemetery in Orange, New Jersey. History from Wikipeida and OldCompanyResearch.com.