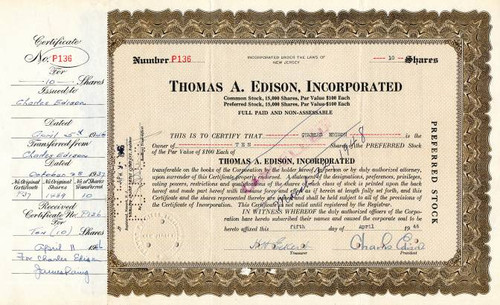 Beautiful certificate from Thomas A. Edison, Incorporated issued in 1946. This historic document was printed by Broun-Green Co. and has an ornate border around it. This item is hand signed by the Company's President, Charles Edison, and Treasurer and is over 65 years old. Thomas A. Edison, Incorporated was incorporated on January 27, 1896, as the National Phonograph Company, then reorganized and newly incorporated as Thomas A. Edison, Inc., on February 28, 1911. Over time it consolidated most of Edison's companies, including the Edison Phonograph Works on August 28, 1924, Edison Storage Battery Company on June 30, 1932, and Emark Battery Corporation on December 30, 1933. The company merged with McGraw Electric Company on January 2, 1957, and became known as McGraw-Edison Company. In 1985 McGraw-Edison was absorbed by Cooper Industries. History from OldCompany.com (old stock certificate research service)