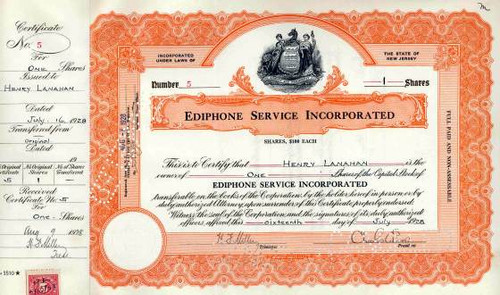 Beautifully engraved RARE certificate from the Ediphone Service Incorporated issued in 1928. This historic document has an ornate border around it with a vignette of a shield between two allegorical women. This item is hand signed by the Company's President ( Charles Edison ) and Treasurer ( H. F. Miller ) and is over 78 years old. There were only 100 of these certificates ever printed and only 10 of them were ever issued. This is certificate #5. The certificate was made out to Henry Lanahan and endorsed by him on the verso. It was also signed twice by H. F. Miller as Treasurer. Both Charles Edison and Miller were officers of the Thomas A. Edison Coproration and the Edison Storage Battery Company. Henry Lanahan was the General Counsel for Thomas Edison and his companies. Charles Edison was born at Glenmont on August 3, 1890 at Glenmont. Charles graduated from the Hotchkiss School in Lakeville, Connecticut. He married his college sweetheart, Carolyn Hawkins, at his parents' winter home in Fort Myers, Florida, March 27, 1918. He became president of his father's company, Thomas A. Edison, Incorporated, in 1927. He ran the company until it was sold in 1959. Charles is the best known of the Edison children because of his second career, in public service. In the mid-1930s he served in the cabinet of President Franklin Roosevelt--first as Assistant Secretary of the Navy, then as Acting Secretary. New Jersey voters elected him as their governor in 1940, but Charles broke a family tradition in the process--he ran as a Democrat. He proposed an updated state constitution for the state, but voters rejected it in a statewide referendum. However, his work inspired later New Jersey legislators to pass a modern constitution after Edison's governorship. He also founded a charitable foundation that now bears his name, the Charles Edison Fund. He died on July 31, 1969 only a few weeks after man first landed on the moon.

Charles Edison's Signature
Thomas Edison invented the phonograph in the 1870's using a tinfoil based cylinder. Subsequently, wax cylinders became the standard and Edison adapted accordingly. As a natural progression of his idea, Edison invented the Ediphone to compete with the Columbia Graphophone Product called the Dictiphone. The product's purpose was to record dictation for letters and notes so a secretary could later type it buy loading a cylinder in their machine. This would avoid the costly need for a stenographer. 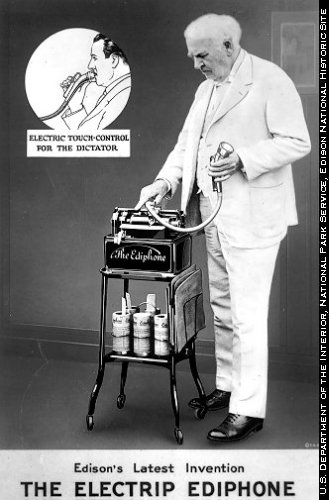 Early Ediphone Advertisement
The Ediphone had a tube to speak in and the voice vibrations would be recorded on a wax cylinder. A secretary would then type up the recording and then shave the used layer of the cylinder so it could be reused. 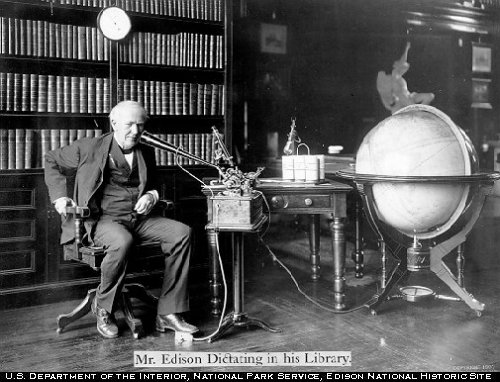