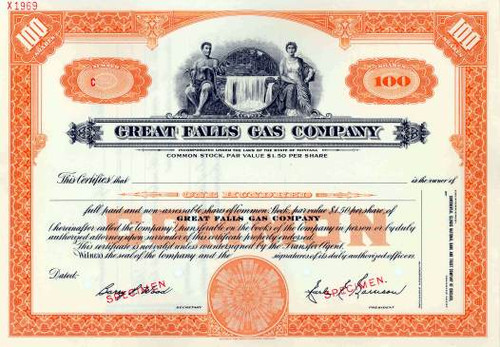 Beautifully engraved SPECIMEN certificate from the Great Falls Gas Company. This historic document was printed by the Security-Columbian Banknote Company and has an ornate border around it with a vignette of a waterfall between an allegorical man and woman. This item has the printed signatures of the Company's President and Secretary. 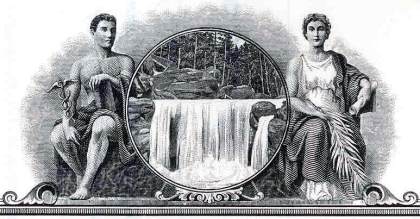 Certificate Vignette
ENERGY WEST Inc began serving customers as the Great Falls Gas Company in 1909 when gas lights served by the utility were installed in the original town site of Great Falls. Gas supplies became more plentiful with the completion of a natural gas pipeline in 1928. Residential customers welcomed the opportunity to replace their dirty and inefficient coal furnaces with natural gas for heating their homes. The Company continued to serve the growing young city over the years. In the 1970's, Great Falls Gas began to implement new conservation services as the nation and its people became more energy conscious. Energy audits, low interest loans and installation of insulation became regular services. In 1983, Great Falls Gas began a new era when it moved into larger office space in the remodeled Great Northern depot building. Offices for the original utility and its reorganized parent, ENERGY WEST, remain in this building today. In 1993, the corporation adopted name ENERGY WEST to more clearly reflect an organization operating utilities and propane sales businesses in three states. Cascade District is a propane utility serving the Cascade and Hardy Creek areas. The company, serving about 300 customers, has been in operation since the underground system was installed during the summer of 1993. West Yellowstone District began operations in 1995, The company provides natural gas utility service from a 55,000 gallon storage tank of liquefied natural gas trucked from southwest Wyoming. Rocky Mountain Fuels markets propane to propane retailers throughout the State and in the entire Rocky Mountain Region.