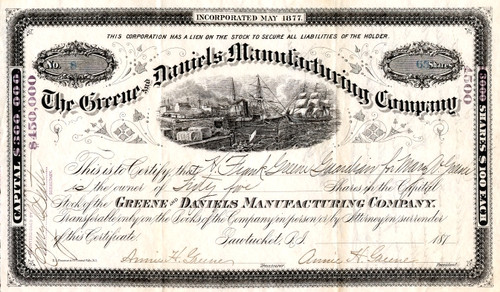 Beautifully printed certificate #8 from the Greene and Daniels Manufacturing Company printed in 1877. This historic document was printed by and has an ornate border around it with a vignette of ships next to a dock. This item has the signatures of the Company's President, Annie H. Greene and Secretary, and is over 135 years old. Issued to H. Frank Greene as Guardian for Mary A. Green and signed on the back by H. Frank Green.

Certificate Vignette
As reported around 1890: The Greene & Daniels factory is one of the oldest enterprises in Pawtucket, and it is a question if the firm was not the first to make spool cotton in this country. It was one of the pioneers, at all events. Benjamin F. Greene, the father of the present president of the corporation, worked as second hand in a mill of 700 spindles for seventeen years previous to 1840. At that time with four other persons he leased a room 80x36, in Central Falls, and with 600 spindles began the manufacture of cotton yarn or thread. In 1845, he removed to Maple- ville, R. I., where he had a larger mill, and in 1850 he again removed to Richmond, R. I., at which place he was running 2,000 spindles. That year, 1850, Horace Daniels was employed as book-keeper and assistant super- intendent of the mill. Mr. Daniels was a practical man, and observed that Mr. Greene was selling his cotton yarn to people who were winding it on spools. Mr. Daniels suggested that Mr. Greene wind his own cotton, and put it on the market in this form. The business increased and in 1853 Mr. Daniels became a partner in the firm. In 1855 Mr. Greene decided to return to his old home in Central Falls, and the machines were transferred to the present location. About this time Mr. Daniels took out a patent for dressing the thread which became very pop- ular, and the Greene & Daniels ivory finish spool cotton was sold everywhere. In 1860, an enlargement was made, and in 1865 it was necessary to repeat the opera- tion, and at one time the firm was making 35,000 dozen per week of this celebrated cotton. In 1876, Mr. Daniels died, and July i, 18771 the firm became an incorporated company under the name of the Greene & Daniels Manu- facturing Company, with Benj. F. Greene, president, E. A. Greene, treasurer, and George P. Grant, agent. In 1886, Benj. F. Greene died, and the officers of the company became E. A. Greene, president, and George P. Grant, treasurer. When General Daniels died, this spool cotton was being manufactured, and it continued till about ten years ago, when the use of the sewing machine brought the soft-fin- ished six-cord threads, like the Willimantic and Coats, into more extended use. The ivory finished cotton of Greene & Daniels was a three-cord thread, and while it is still manufactured to some extent, the demand has been superseded by a different class of goods. But the production of cotton yarns and threads for manufacturing purposes has not been diminished at the works of this company. In 1876 the extent of the industry was 22,000 spindles ; in 1890 it was 32,000. The company does bleaching and coloring, as well as the spinning of the yarn, and has done considerable coloring for the woolen people. Since 1876 and 1877 a specialty has been made of a high grade of yarns, in the different colorings, for ladies' dresses, and this grade of goods is sold to manu- facturers for many purposes. Since that time there has been a complete revolution in the methods of manufac- turing yarns, and the company has put in new machin- ery, using the English system of carding and combing. About four hundred people are employed, and all the yarn used for the manufacture of spool cotton from the outset has been spun at the mills.