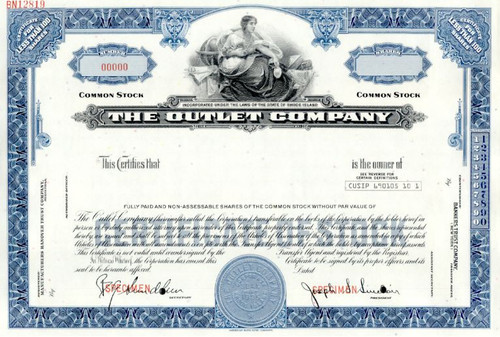 Beautifully engraved specimen certificate from the Outlet Company printed in 1925. This historic document was printed by the American Banknote Company and has an ornate border around it with a vignette of an allegorical woman. 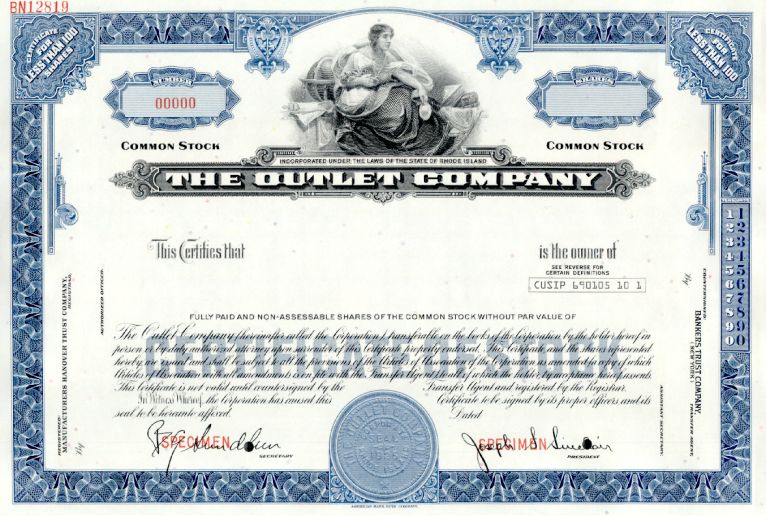 Certificate
The Outlet Company was a corporation based in Providence, Rhode Island, which owned holdings in both retail and broadcasting. The centerpieces of the group was its flagship Providence store (The Outlet) and WJAR radio and television, also in Providence. The Outlet Company was formed in 1891 when opened brothers Joseph and Leon Samuels opened a department store at 176 Weybosset Street in downtown Providence. Known as The Outlet, it quickly became a Providence landmark to the point of occupying an entire city block and attracting shoppers from all over southern New England. For decades, the store remained strong with its sole flagship location and dominated the field of retail in not only Providence, but Rhode Island as a whole. With the changing field of retail in the mid-20th Century, the company diversified with opening suburban locations as well as buying some existing stores such as Philadelphia-based Phillipsborn and Bedya,[citation needed] the midwestern Hughes & Hatcher chain, and The Edw. Malley Co. department store chain in New Haven, Connecticut. However, the allure of building a broadcasting empire under the leadership of company president Bruce Sundlun led Outlet to leave the retail business in November 1980. In 1981, the Outlet Company sold the original downtown retail store (and other stores) to United Department Stores and the flagship Outlet location on Weybosset Street was shuttered in 1982. The building was destroyed by fire on October 16, 1986. Broadcasting As with many northeastern department stores in the 1920s, Outlet entered radio as a means of promoting their products to a wide audience. In 1922, Outlet entered broadcasting with the sign on of WJAR, which in 1923 became the first affiliated station of the NBC Red Network. In 1949, Outlet entered television broadcasting with the launch of WJAR-TV on channel 11; the station moved to channel 10 in 1953. Along with retail, Outlet saw a mass expansion into broadcasting in the 1960s and beyond. After the sale of the retail divisions, the company went into a failed merger attempt with Columbia Pictures before it was sold in 1984 to members of the Rockefeller family. Two years later, the company was sold again[3] to a combination of Outlet executives and venture capitalists who renamed the company to Outlet Communications and began a complete withdrawal from radio followed by a slimming down the number of their TV stations to three. In early 1996, Outlet and its three stations (plus control of two others) were sold to NBC; the name lived on as a license name of their former stations for a while afterward. After ten years, all three stations were put up for sale by NBC on January 9, 2006, with Media General buying the stations on April 6, 2006 (the sale was finalized on June 26, 2006). This virtually undid the NBC-Outlet merger of a decade earlier. Former Outlet-owned stations Television stations City of license / Market Station Channel TV (RF) Years Owned Current Ownership Status Stockton - Sacramento - Modesto KOVR 13 (25) 19781986 CBS owned-and-operated (O&O) Orlando - Daytona Beach - Melbourne WDBO-TV/WCPX-TV 6 (26) 19631986 CBS affiliate, WKMG-TV, owned by Graham Media Group Atlanta, Georgia WATL 36 (25) 19851989 MyNetworkTV affiliate owned by Tegna Indianapolis WPDS-TV/WXIN 59 (45) 19841989 Fox affiliate owned by Tribune Broadcasting Syracuse, New York WNYS-TV 9 (17) 19711978 ABC affiliate, WSYR-TV, owned by Nexstar Broadcasting Group Goldsboro - Raleigh - Durham, N.C. WYED-TV/WNCN 17 (17) 19931996 NBC affiliate owned by Media General Columbus, Ohio WCMH-TV 4 (14) 19761996 NBC affiliate owned by Media General Providence, R.I. - New Bedford, MA WJAR-TV ** 10 (51) 19491996 NBC affiliate owned by Sinclair Broadcast Group San Antonio KSAT-TV 12 (12) 19681986 ABC affiliate owned by Graham Media Group History from Wikipedia, Encyberpedia and OldCompany.com (old stock certificate research service) About Specimen Certificates Specimen Certificates are actual certificates that have never been issued. They were usually kept by the printers in their permanent archives as their only example of a particular certificate. Sometimes you will see a hand stamp on the certificate that says "Do not remove from file". Specimens were also used to show prospective clients different types of certificate designs that were available. Specimen certificates are usually much scarcer than issued certificates. In fact, many times they are the only way to get a certificate for a particular company because the issued certificates were redeemed and destroyed. In a few instances, Specimen certificates were made for a company but were never used because a different design was chosen by the company. These certificates are normally stamped "Specimen" or they have small holes spelling the word specimen. Most of the time they don't have a serial number, or they have a serial number of 00000.