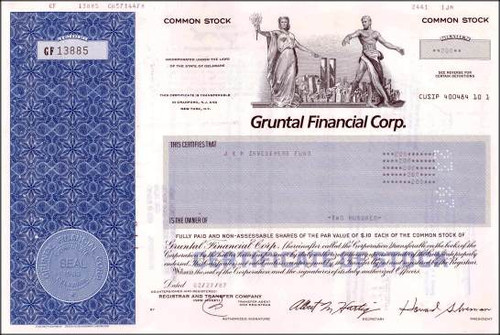 Beautifully engraved certificate from the Gruntal Financial Corp. issued in the 1980's. This historic document was printed by the American Banknote Company and has an ornate border around it with a vignette of an allegorical man and woman standing with the New York Skyline including the World Trade Center in the background. This item has the printed signatures of the Company's President (Howard Silverman) and Secretary and is over 15 years old. We have not seen many of these around. 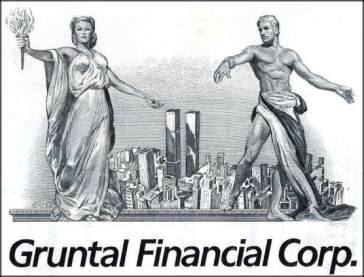 Certificate Vignette
On April 29, 2002 Ryan, Beck & Co., LLC, a subsidiary of BankAtlantic Bancorp (NYSE: BBX - news), completed the transaction announced April 22, 2002 under which it acquired certain assets and related entities from Gruntal & Co., LLC. This transaction has significantly expanded Ryan, Beck's reach through its private client group. The combined firm now has in excess of 600 retail account executives located in 34 offices nationwide, with nearly $19 billion in client assets. Institutional equity sales will be conducted through 6 offices nationwide. The transaction also provided for Ryan, Beck's acquisition of GMS Group, LLC. GMS is a wholly owned subsidiary of Gruntal. GMS, also based in Livingston, New Jersey, has 80 account executives focusing on tax-exempt securities in 6 offices. Ryan, Beck has retained substantially all of Gruntal's capital markets activities, including institutional sales and trading, research, investment banking and other groups. The final blow to Gtuntal was the September 11, 2001 attack on the WTC which makes this vignette very ironic. Founded in 1880 and headquartered in New York City, Gruntal Financial L.L.C., which was comprised of Gruntal & Co., L.L.C. and The GMS Group, L.L.C., was a high-quality full-service financial services firm with a diverse business mix serving affluent individual, institutional, and corporate clients. The firm employed approximately 620 account executives across 31 locations in the Northeast, Florida, Illinois, California, Georgia, and Texas, with client assets totaling approximately $19 billion. Gruntal & Co. consisted of a strong franchise in private client services, institutional equity sales and trading, investment banking, research, and stock loan conduit, and fixed income sales, trading, and distribution. Gruntal was a member of the NYSE and NASD. They had a single office on Broadway. The securities broker survived the 1929 stock market crash, expanded to 11 offices and went public in 1983, and established offices throughout the U.S. after being purchased by a Swiss-based insurance company in 1987. But Gruntal's story of success turned into a tale of greed and back-office wheeling and dealing in 1994, when the company announced that it had discovered an embezzlement scheme by three senior officials. In a 10-year period, the former officials bilked customers and the company out of about $14 million. Gruntal admitted to lapses in regulatory oversight. In 1995, former chairman and CEO Howard Silverman stepped down; he was rumored to have been pushed out. The next year, the company agreed to $6.2 million in fines, and set aside an additional $5.5 million to cover future claims. The company was restructured in 1997 as a limited liability company and sold to a management group led by current CEO Robert Rittereiser. Despite its recent troubles, Gruntal is still a financial powerhouse, with $195 million in capital and $2.9 billion in assets. In April 1999, Gruntal announced that it was going to join forces with Florida-based A.F. Best Securities. But in June 1999, scandal resurfaced as the SEC sued two former senior managers, contending they diverted $11 million from customer accounts.