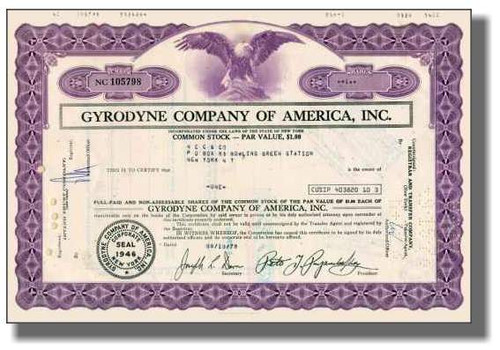 Beautifully engraved certificate from the Gyrodyne Company of America, Inc. issued in 1967-1978. This historic document was printed by the American Banknote Company and has an ornate border around it with a vignette of an eagle with its wings spread out perched upon a rock. This item has the printed signatures of the company's president, Peter J. Papakodas and its secretary, Joseph Dom. This certificate is over 23 years old. 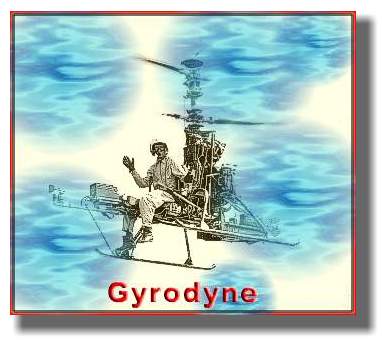 Gyrodyne Coaxial Helicopter
The Gyrodyne Company was founded by Peter J. Papakodas in 1946 with the intent of producing a new type of helicopter. Mr. Papakodas bought the bankrupt assets of the Bendix Helicopter Company These helicopters were called coaxial - having two sets of counter-rotating blades thus eliminating torque and the need for a tailrotor. Under a 1950 U.S.Navy flight demonstration program, Gyrodyne produced this helicopter, the Model 2C at their St. James factory in 1952. Its successful flight program proved conclusively that the coaxial configuration offered many advantages and it ultimately led to a Navy contract for 750 drone versions in the 1960's. This helicopter could seat six people making it the largest ever built on Long Island. Specifications: Rotor Diameter: 48' Width: 12' Engine: 450 hp Pratt & Whitney R-985 Top Speed: 110 mph Weight: 3800 lbs In 1960 Gyrodyne demonstrated for the U.S. Navy a small remote-controlled helicopter for the purpose of combating the growing Soviet submarine threat. This was the first ever free flight of a completely unmanned helicopter. The helicopter was radio-controlled and was launched from a destroyer to attack submarines so the ship itself would not have to come within range of the target. The production version, the QH-50, was armed with two Mark 44 acoustic homing torpedoes. After it was launched it was to be tracked by radar from its ship and guided by signals to the enemy submarine which was detected by sonar. It would then launch its torpedoes and fly back to the ship for re-use. 750 QH-50's were built in St. James between 1960 and 1968. Specifications: Rotor Diameter: 20' Length: 12' 11" Engine: 290 hp Boeing T-50 Turbine Top Speed: 92 mph Weight: 1754 lbs.