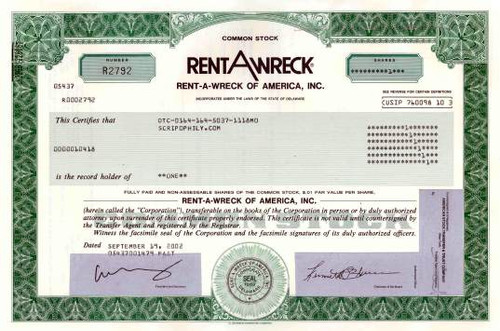 Beautifully engraved certificate from the Rent - A - Wreck of America, Inc. This historic document was printed by the Jeffries Banknote Company and has an ornate border around it with a vignette of the company logo. This item has the printed signatures of the Company's President ( Ken Blum, Jr ) and Secretary and Chairman of the Board.

Certificate Vignette
For over twenty-five years the Rent-A-Wreck name has been making news and the Rent-A-Wreck way of doing business has been changing the auto rental industry. As the first used car rental company in the world, the unique Rent-A-Wreck story has been chronicled in hundreds of newspapers and magazines, and has been featured on television programs as diverse as NBC News and the Oprah Winfrey Show. Our name brings the benefits of national advertising exposure and a strong media presence bolstered by effective public relations and promotions. All of which have helped Rent-A-Wreck become one of the most established names in the industry with over 500 neighborhood locations across the country and around the world. In an independent national survey of car rental companies by Entrepreneur Magazine, Rent-A-Wreck ranked second overall. Rent-A-Wreck is a name people love. Customers have come to identify Rent-A-Wreck with quality service and safe, clean and affordable vehicles that offer tremendous value for their rental dollars. Rent-A-Wreck has built its reputation by exceeding expectations. Remember, with Rent-A-Wreck you always do better than the name suggests, and customers remember that. Rent-A-Wreck locations are easy to find. Each franchise is listed in its local Yellow Pages, and a nationwide toll-free number provides transfer connect services that send instant referrals from the corporate base to any Rent-A-Wreck office around the world. Worldwide name recognition, national advertising and media exposure and local training and support. On August 12, 2002, the Board of Directors authorized management to terminate the Company's registration under the Securities Exchange Act of 1934. The Company will accomplish this by making a filing with the Securities and Exchange Commission, which filing is expected to be made on August 30, 2002. The effect of the filing will be to deregister the common stock of the Company under the 1934 Act, delist the Company's common stock on the Nasdaq Small Cap market, and immediately terminate the obligation of the Company to file periodic and annual reports with the SEC. Notwithstanding the increased liability to officers under recent legislation, the Company's Chief Executive Officer has elected to certify the correctness of the Company's 10-QSB for the quarter ended June 30, 2002, so as to cut off head-on any potential claim that the Company is not fully forthcoming in its financial reporting. Furthermore, so as to provide adequate notice to shareholders of the potential diminution of liquidity for their shares which may occur when Nasdaq delists the stock automatically upon the filing of Form 15 with the SEC, the Board has instructed counsel not to file this form before Friday, August 30. The Company reached this decision after extensive discussions with respect to the advantages and disadvantages of deregistering. Ken Blum, Jr. added "the Company believed that deregistration will benefit the Company by decreasing certain expenses and free up management and Company personnel to remain more focused on operating the Company rather than satisfying the increasingly burdensome securities law reporting requirements." "Despite small trading volume and virtually no following on Wall Street, the Company has persevered by maintaining its Nasdaq listing for 17 years in the hope that the widespread recognition of the Company's brand coupled with consistently strong financial performance, at least from fiscal 1994 through fiscal 2001, would lead to the development of a deeper and more active market for its shares. This clearly never came to pass. Reluctantly, therefore, the Company has concluded that shareholders will, in the long run, be better served by lower expenditures for SEC compliance than by maintenance of what has, at best, been a desultory public market for its shares."