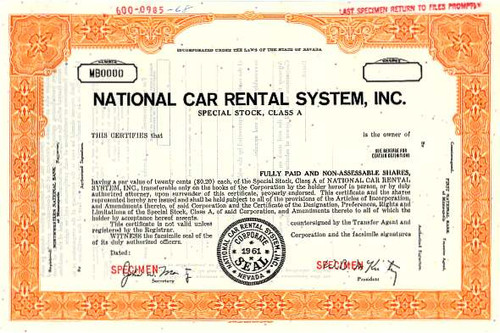 Beautifully engraved SPECIMEN certificate from the National Car Rental System, Inc. This historic document was printed by the American Bank Note Company and has an ornate border around it. This item has the printed signatures of the Company's President and Secretary. National Car Rental has been an industry pacesetter throughout its 56-year history. National was formed on August 27, 1947, as a group of 24 independent car rental operators with 60 locations and 800 vehicles. They incorporated as a for-profit corporation in 1959 and quickly established an identity as "the best in localized, personal service." Over the years, National would go on to pioneer many industry features to improve the rental experience for their customers. In 1954, they became the first car rental brand to offer one-way rentals for those wishing to rent cars in one town and leave them in another. In 1966, National equipped its regional reservation offices with the "Telemax" computer system, officially becoming the first car rental company to bring computers into daily reservation operations. After airline industry deregulation in 1976, National opened its doors to the new wave of leisure travelers when it became the first to offer flat rates to car renters. As National continued to grow and evolve, so too did its identity. While being one of the earliest companies to initiate corporate account business in the late '70s, the 1980s and beyond for National can be characterized by its commitment to the corporate traveler. In 1987, National introduced the industry's first, comprehensive frequent-renter program, "Emerald Club", along with the "Paperless Express Rental Agreement," which made car rental faster by using information stored in the computer to process the whole transaction in seconds. National continued to develop ways to make the car rental process more efficient to time-sensitive business travelers. Innovations such as the "Emerald Aisle," where members select their own cars and are on their way without filling out any paperwork, allowed members to completely bypass the rental counter. Later, the "Choice Rental Process" would give all National customers the ability to choose their own vehicle. Keeping in tune with the needs of the growing population of small business owners, National started "QuickRent" service in 2002, which offered customers, who were not enrolled in Emerald Club, the ability to bypass the counter when they complete their rental transaction online. Through tremendous growth, organizational changes and new travel industry innovations, National has remained a leader in both business and leisure rentals. Today, the National Car Rental brand is one of the world's largest rental car companies and serves the most popular domestic and international travel destinations through a network of more than 2,000 locations in the United States, Canada, Europe, Latin America, the Caribbean, Asia-Pacific, Africa and Australia. History from company press releases. About Specimens Specimen Certificates are actual certificates that have never been issued. They were usually kept by the printers in their permanent archives as their only example of a particular certificate. Sometimes you will see a hand stamp on the certificate that says "Do not remove from file". Specimens were also used to show prospective clients different types of certificate designs that were available. Specimen certificates are usually much scarcer than issued certificates. In fact, many times they are the only way to get a certificate for a particular company because the issued certificates were redeemed and destroyed. In a few instances, Specimen certificates were made for a company but were never used because a different design was chosen by the company. These certificates are normally stamped "Specimen" or they have small holes spelling the word specimen. Most of the time they don't have a serial number, or they have a serial number of 00000. This is an exciting sector of the hobby that has grown in popularity over the past several years.