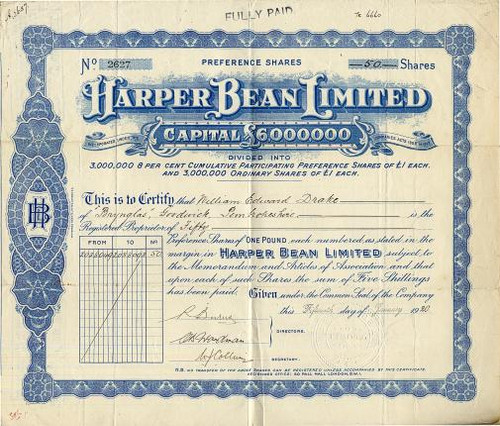 Beautiful certificate from Harper Bean Limited issued in 1920. This historic document was printed by Whitehead Morris Limited and has an ornate border around it with a vignette of the company name. This item has the signatures of the Company's Director's and Secretary and is over 88 years old.

Certificate Vignette
Harper Bean Limited was started for mass car production in England. Harper, Bean, Ltd., included such firms as A. Harper Sons Bean, Iron founders of Dudley; Vulcan Motor and Engineering Company of Stourport, Swift of Coventry, the Britah Trading Corporation, and Hadfielda, Ltd., steel manufacturers of Sheffield. John Harper (Jack) Bean was managing director of A Harper, Sons and Bean, which had been established in 1826 as an iron foundry in Dudley. It became A Harper and Sons in 1901 and A Harper, Sons and Bean in 1907. During the Great War the company became a major munitions manufacturer and specialised in shell cases. In 1918 the company decided to enter motor manufacture to make use of their capacity. And in 1919 they purchased the rights and patterns for the Perry, introduced in 1914, and began building it as a Perry Bean. John Harper Bean, had visited the USA after the war to buy machine tools for his envisaged modern car factory at the Tipton site where he aimed to produce 10,000 cars a year with his new combine. It was launched in November 1919 at the Savoy Hotel in London. Harper Bean included the Vulcan, Swift and ABC car companies and many component suppliers. The intention was to assemble the cars at Tipton and make the bodies at the Dudley works but that factory could not cope with the quantities required so an order for 2,000 bodies were placed with the Grahame-White Aviation Company of Hendon, Middlesex. When Claude Grahame-White asked for part payment he was refused and Harper Bean took the business to Handley Page at Cricklewood. In 1921 John Harper Bean resigned and A Harper, Sons and Bean were placed in receivership. That year was a time of recession in Britain and Austin were also in receivership, while Morris had a factory full of unsold cars. By April 1923 the receiver was discharged and money had been raised through the banks and the steel supplier, Hadfields. Hadfields took over in 1926 and renamed the company Bean Cars. John Harper Bean left in 1927 to join Guy, while car production continued until 1929. Commercial vehicles carried on until 1931. In 1933 Hadfields set up Beans Industries as a general engineering and foundry business. Beans Industries was sold to Standard Triumph in 1956 from where they became part of British Leyland. By 1975 they were known as Beans Engineering and a management buyout followed in 1988. In 1991 they purchased Reliant, which went into receivership in 1991 and took Beans with them. John Harper Bean died in March 1963. History from Wikipedia and OldCompanyResearch.com (old stock certificate research service).