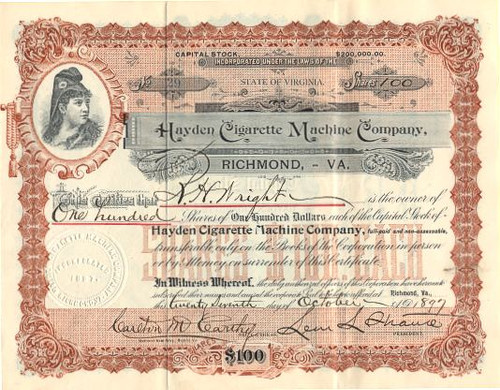 Beautiful certificate from the Hayden Cigarette Machine Company issued in 1897. This historic document was printed by National Seal Wks Company, Richmond Va. and has an ornate border around it with a vignette of a woman's head. This item has the signatures of the Company's President, Sean S. Shaute and Secretary, Careton McCarthy and is over 112 years old. 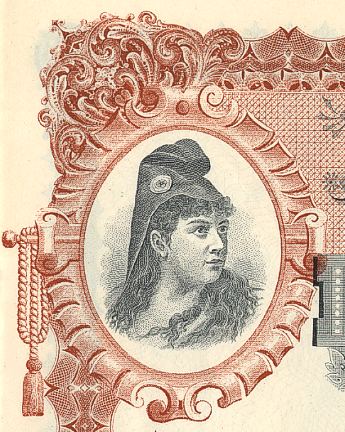 Certificate Vignette
Carlton McCarthy (18471936) was the mayor of Richmond (Virginia, United States) from 1904 to 1908. Prior to this, he served as a soldier in the Confederate Army. He fought in local armies but was not formally enlisted private until 1864 in the Richmond Howitzers of the Army of Northern Virginia.. He wrote a book about his four years of experience in a book called Detailed Minutiae of Soldier Live in the Army of Northern Virginia 1861-1865., first published by Carlton McCarthy and Company in 1882 with a second edition published in 1888. A copy of this book is on display at the Museum of the Confederacy as well as at the Virginia Historical Society. His writings have been featured in other publications, such as chapter 6 of The Civil War Soldier: A Historical Reader by Michael Barton, Larry M. Logue and a chapter in Albert Bushnell Hart's book, The Romance of the Civil War, published in 1896 and now in the public domain. The company's patent for its cigarette machine is described below: Patent number: 595474 Filing date: Jun 1, 1897 Issue date: Dec 14, 1897 Be it known that we, George H. Hayden and Frank D. Hayden, citizens of the United States, residing at Richmond, in the county of 5 Henrico and State of Virginia, have invented certain new and useful Improvements in Cigarette-Machines, of which the following is a full, clear, and exact description. The object of our invention is to produce a machine of the class used for manufacturing what is known as the "Spanish," "Cuban," "Mexican," or "folded-end" cigarette--that is to say, a cigarette which consists of a filler, preferably of granular or flake tobacco, closed by an unpasted paper wrapper, but which has its ends folded or tucked in,whereby the wrapper is held securely around the filler, yet permitting the cigarette to be readily opened for rolling by hand, which is the custom, of users of this form of cigarette. To this end our invention consists of an organized machine as a part of the operation of which a web of paper is fed by suitable means to a cutting mechanism which severs the web a length sufficient to form the wrapper of a cigarette. The severed wrapper is then carried to a device for forming it into a cylinder or tube and tucking or folding its lower end, after which it is placed as a shell within an opening in a rotating cylinder and conveyed to the filling mechanism. The cylinder contains a sufficient number of openings or bores to make the operation of the machine continuous. Tobacco is fed in the machine here in described to six wrapper-shells at one time, each getting during one-sixteenth of the rotation of the cylinder one-sixth of the quantity necessary to form a cigarette. After each wrapper-shell has received its proportional amount of tobacco a rod descends, packing the tobacco therein, the cigarette being thus more evenly packed and filled by consecutive operations than would be the case if the entire quantity of tobacco to form a cigarette were introduced into the shell at one time. The filled and packed wrapper - shell then passes by rotation of the cylinder to second tuckers, which close the upper end of the shell, each cigarette after this final operation being ejected from the machine....

Bank of the Valley in Virginia - Richmond, Virginia 1868