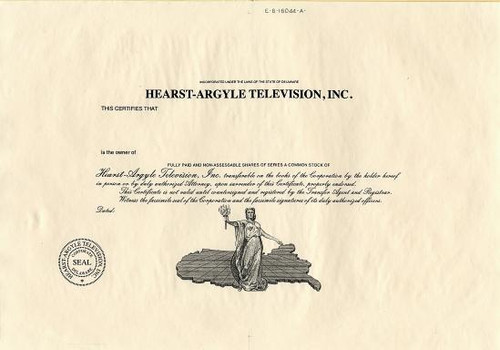 Beautiful engraved Specimen Proof certificate from the Hearst - Argyle Television, Inc . This historic document has a vignette of an allegorical woman. 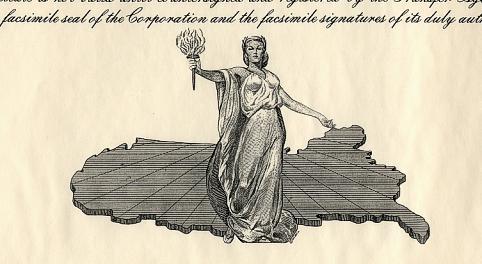 Certificate Vignette
Hearst-Argyle Television, Inc., is a broadcasting company in the United States. Hearst-Argyle is owned by the New York City-based Hearst Corporation, and holds joint ventures in television production with NBC Universal Television Distribution, has an Internet partnership with Internet Broadcasting Systems, Inc., and trades on the New York Stock Exchange under the symbol "HTV." Hearst-Argyle was formed in the late-1990s with the merger of Hearst Corporation's broadcasting division and the remaining stations owned by Argyle Television, which several years earlier sold off some of its stations to New World Communications, which eventually became Fox-owned stations. Hearst-Argyle is the second-largest NBC affiliate owner and the largest ABC affiliate group in terms of audience reach. About Specimens Specimen Certificates are actual certificates that have never been issued. They were usually kept by the printers in their permanent archives as their only example of a particular certificate. Sometimes you will see a hand stamp on the certificate that says "Do not remove from file". Specimens were also used to show prospective clients different types of certificate designs that were available. Specimen certificates are usually much scarcer than issued certificates. In fact, many times they are the only way to get a certificate for a particular company because the issued certificates were redeemed and destroyed. In a few instances, Specimen certificates we made for a company but were never used because a different design was chosen by the company. These certificates are normally stamped "Specimen" or they have small holes spelling the word specimen. Most of the time they don't have a serial number, or they have a serial number of 00000. This is an exciting sector of the hobby that grown in popularity over the past several years.