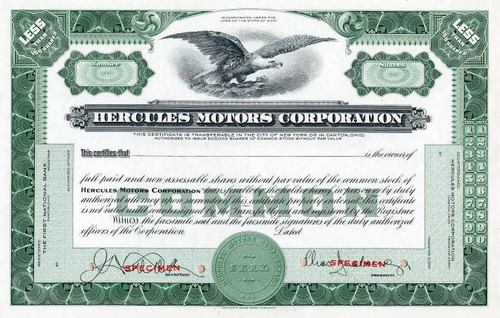 Beautifully engraved specimen certificate from the Hercules Motors Corporation. This historic document was printed by the Security Banknote Company and has an ornate border around it with a vignette of an eagle. This item has the printed signatures of the Company's President, and Secretary.

Certificate Vignette
The Hercules Motors Corporation was organized in Canton, Ohio 73 years ago (1915) to supply highs-peed, lightweight gasoline engines for the fast-growing transportation industry. These engines became the standard power for the then-major independent truck manufacturers. Demand for the engines grew in other industries-farm machinery, construction, oil-field equipment, generator sets, etc., brought about by the dependability of the engines and the company's ingenuity in designing and tailoring them to fit any application. In 1931 Hercules and its numerous well-known, manufacturing customers recognized the need for high-speed, lightweight diesel or compression-ignition engines, theretofore used only in stationary and heavy marine application due to size and weight. Hercules came through with a line of high-speed, lightweight diesel engines. The new diesels paralleled Hercules line of gasoline engines and could be used by its customers without radical design changes in the equipment. During World War II, Hercules recognized its responsibility to supply the U.S. and Allied armed forces with infinitely more engines than could then be produced. The company greatly increased its capacity to 18,000 engines per month by building additions to the existing plant, at its own expense, and providing the tools and equipment to accompany the expansion. The result: nearly 750,000 Hercules engines, representing 65 million horsepower, went to war in every conceivable type of mechanized military equipment-tanks, armored cars, scout cars, tank transporters, landing craft, picket boats, jeeps, amphibious tractors, rescue craft, trucks for all purposes. Also war-related equipment: power for generators, welders, agricultural, construction and maintenance machinery needed to sustain the greatly expanded economy. Hercules pioneered again in 1956 with a new line of interchangeable, overhead-valve gasoline and diesel engines with three, four, and six cylinders. Identical cylinder blocks, crankshafts, valves, connecting rods, gear covers, bell housings, etc. were used for the companion gasoline and diesel engines. History from Wikipedia. About Specimen Certificates Specimen Certificates are actual certificates that have never been issued. They were usually kept by the printers in their permanent archives as their only example of a particular certificate. Sometimes you will see a hand stamp on the certificate that says "Do not remove from file". Specimens were also used to show prospective clients different types of certificate designs that were available. Specimen certificates are usually much scarcer than issued certificates. In fact, many times they are the only way to get a certificate for a particular company because the issued certificates were redeemed and destroyed. In a few instances, Specimen certificates were made for a company but were never used because a different design was chosen by the company. These certificates are normally stamped "Specimen" or they have small holes spelling the word specimen. Most of the time they don't have a serial number, or they have a serial number of 00000. This is an exciting sector of the hobby that has grown in popularity over the past several years.